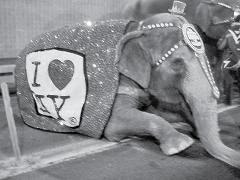 From the Queens Times:

Once again New York City hosts the circus, and the popular parade of elephants will be making a grand entrance via the Queens Midtown Tunnel just before midnight on Monday, March 23rd. Motorists should use alternate routes during this period (from 11:30 PM); the tunnel is expected to re-open at approximately 2 AM, Tuesday, March 24th.

A total of ten Asian elephants, nine horses and three ponies, along with animal trainers and escorts, are coming to Manhattan to appear in the Ringling Bros. and Barnum & Bailey Circus.

The annual “elephant parade” route is through the north tube of the QMT. The circus entourage will exit the tunnel in Manhattan and make its way westward across E.34th Street to Madison Square Garden, where the show runs from Sun., March 26th through Mon., April 13th.
Posted by Queens Crapper at 12:54 AM

Pathetic parade. I'll probably be the only one to think these shows are ridiculously dated. Go to a zoo - a zoo that took an abused animal from somewhere where it was abused (and couldnt be released in the wild) and gave it a home in a location that resembled its natural habitat.

You really have to be stupid if you get your jollies watchin a tiger jumpin through a big flamin hula hoop.

If "Pinky" Gallagher is still a Republican he might want to join in on that gray parade from the rear.

We hear that's the position he likes the best.

I can picture it now that bald headed pink bastard in a daisy chain with the elephants!

I'll probably be the only one to think these shows are ridiculously dated.
--------
You are. There is something wonderful and timeless about the circus - yes, we have seen the same acts since Ed Sullivan and before, but when you look at the garbage that passes for entertainment today for kids, its the best thing going.

Come on. Get real.

"I'll probably be the only one to think these shows are ridiculously dated."

They will one day enter the trash bin of history as society continues to evolve.

And one would hope that your view would be in the majority in this part of the world.

"They will one day enter the trash bin of history as society continues to evolve."

do they pay the toll

"..as society continues to evolve."

"..as society continues to evolve."
Like Competitive Eating Contests?

Elephants are chained for an average of more than 26 hours at a time, sometimes for as many as 60–100 hours straight on extended trips. Chained and barely able to take a step, the elephants sway neurotically.
Kenneth Feld—CEO of Feld Entertainment, the company that owns Ringling—had to admit that he's seen handlers use bullhooks to hit elephants in the secret places where the wounds don't show up as much (i.e., under the chin, behind the ear, and on the back of the leg).
Ringling's animal behaviorist testified that an elephant who had been struck with a bullhook was seen dripping blood on the arena floor during a show.
In internal e-mails that came to light, a Ringling veterinary assistant reported, "After this morning's baths, at least 4 of the elephants came in with multiple abrasions and lacerations from the [bull]hooks. … The [lacerations] were very visible …. [A handler] applied … wonder dust just before the show." (Wonder Dust is a gray dressing powder that circus workers can use to conceal bloody bullhook wounds.)
Another internal report documented that Troy Metzler, a longtime Ringling elephant trainer, struck Angelica, a female Asian elephant, three to five times while she was held in stocks before unloading her and then shocking her with an electric prod.
Two former Ringling employees, who had previously blown the whistle to PETA, described the abuse that they witnessed while working for the circus, including a violent beating of an elephant that lasted at least 30 minutes.

Cruelty is not entertaining

How is it possible that such viciousness is tolerated by such large animals? They are extremely intelligent too.

Crapper, if the elephants leave a deposit, will you do another shit identification piece?