Money is no object for NY State or NYC 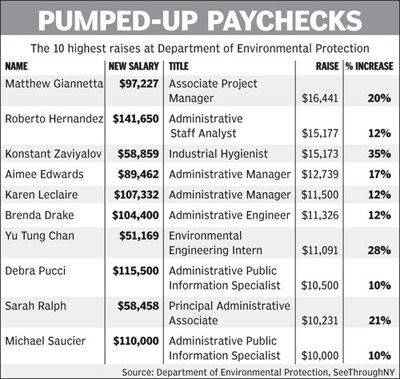 In the middle of a city budget crisis, the agency that runs New York's water and sewer system has doled out almost $300,000 in raises to just 41 workers.

The huge salary jumps at the Department of Environmental Protection - some as high as 35% - come as Mayor Bloomberg has proposed laying off teachers and shrinking the NYPD and FDNY to plug a budget gap of $24 billion in coming years.

DEP officials defended the raises, saying 29 of the workers were promoted to new jobs and 12 took on new responsibilities. 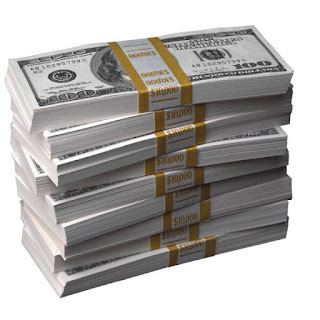 In 2008, state agencies added 232 employees with base salaries exceeding $100,000, according to the Manhattan Institute.

The well-heeled new hires, who included eight members of Gov. Paterson's personal staff, were added as the overall workforce swelled by nearly 1,800.
Posted by Queens Crapper at 12:20 AM

Paper pushers seem to do well in tough times. Gimme an application.

What is an Industrial Hygenist? Is that a fancy government name for Janitor?

Given what it costs to live in NYC, it looks to me like some of those people were long overdue for raises.

New York State and City took taxpayer dollars in these terrible times, and then wasted it on these people.

According to the newest rules of employees receiving taxpayer money, they must return all of it. They contributed to this recession. If they refuse to return the money, it will be taxed at 100% to show them who's in charge.

Obama and the US congress made these rules. They must be applied evenhandedly all across the board.

An industrial hygienist scrapes plaque from sewage pipes. But, he can perform the same job with any container filled with politicians.

Please also see the disparity between the two who actually work, the engineer and industrial hygenist vs. the paper-pushers. In both cases, the pre-raise salaries were pathetic.

A 4-year degree in engineering costs tens of thousands of dollars. It is ludicrous to think that you can pay technologists worse than a secretarial salary.

This is why we are graduating fewer scientists every year and filling the gap with foreigners.

The result? Vulnerability to terrorism and industrial espionage, lack of innovation and a failing industrial base. I also provided administrative support for accreditation of six engineering and engineering technology programs at over 200 universities.

Please note that I have personal knowledge of this situation. I kept degree and enrollment statistics for The American Society of Civil Engineers, the most prestigious professional society of engineers since 1858, for six years.