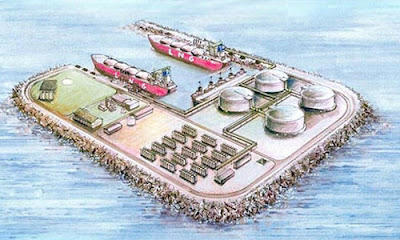 The head of an energy company that plans to build a manmade island off the coast of the Rockaways has donated tens of thousands of dollars to state and federal elected officials, the Daily News has learned.

Howard Bovers, chief of the Atlantic Sea Island Group, is seeking approval to build a controversial liquid natural gas terminal some 15 miles off the Atlantic coast of New York.

Bovers, who gave $5,000 to Paterson in May, said it's important "to pick and choose and find good people to support."

He would not, however, answer a question about whether the approving of the island's construction came up during his meeting with the governor.

"I don't think I even have to answer that question," Bovers said. "You're infringing on my personal life."

Weiner was there 'listening' and talking about how the " 'Rockaway people' are very envirnmentally aware."

One lady said that the project 'would not benefit the community.'

Funny, you could say that about most development projects plucked down unannounced in the middle of a community.

Isn't is great that here in NY, very wealthy people who have business plans dependent on approval by city or state officials, find it in their pure hearts to give those politicians some money.

Odd, their notion of ownership through a transfer of money. Eh?

This island will end up where the last island off Rockaway--Hog Island--ended up. At the bottom of the sea.

Hog Island was a popular resort where Tammany Hall members gorged themselves on rich food and drink. Their descendants can gorge themselves on Benjamins at this trough.

Lets see, an LPG terminal out in the middle ot NYC Upper Bay in a city that encourages immigrantion (or worse, looks the other way when people sneak in) from coutries where terrorism is a way of life.

I have a bad feeling about this.

With land at a premium, the idea of taking land from the sea continues to reappear.

Instead of using the tired old NIMBY argument, Rockaway residents should ask- "An oil terminal? What about that old plan for offshore windmills?"

Windmills may be unsightly, but they provide clean energy. Fight the oil plan with a counter-proposal- bring in the windmills!

The nice thing about windmills is that they are non-flammable. If a hurricane gets them, its all just metal junk, not inflammable chemicals.

Instead of using the tired old NIMBY argument, Rockaway residents should ask- "An oil terminal? What about that old plan for offshore windmills?"
------

So how many community facilities are in Brooklyn Heights? Nice to be smarmy about someone else's community.

They point is, unlike those morons in Astoria with all those power plants that helps someone else's community, they should be congratulated for standing up to Bloomberg.

That is what happens when you have owner occupied homes and long term residents.

Stupid Idea.
1 its right under the Southern takeoff path of JFK

2- The water is not like Abu Dubai, Its the Atlantic. Ruff and over 100 feet deep. It will end up in pieces