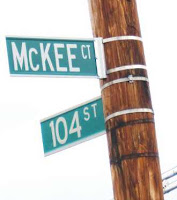 Because it is mostly unheard of, strangers have difficulty navigating Hamilton Beach — which is bounded by Hawtree Basin to the north and west, Jamaica Bay to the south and the A subway line (104th Street) to the east. But now, thanks to some street renaming, it’s the residents who are confused.

They thought their navigational problems would be a thing of the past with the recent passage of street-renaming legislation and the installation of new street signs. But, according to John Bluemke, president of the New Hamilton Beach Civic Association, the new signs are disorienting.

Previously streets were labeled with numbers — now they have names. Bluemke said that he had asked for dual signs containing both the new name and the old street number. But, the city Department of Transportation, which installed the new signs, declined and used just the names.

There's an update from the NY Times.
Posted by Queens Crapper at 12:33 AM

WHY are they renaming streets? This happened in Glendale when 73rd Ave. all of a sudden was renamed 72nd Dr. The business tenants along the street were caught unawares, and so were truckers who drove their big rigs up and down 88th St. looking for 73rd Ave. No fun for neighbors, believe me! And, yes, emergency responders were not notified. The tenants went personally to the local firehouse to inform.Why?!? What is the rationale for renaming streets other than making it impossible then to look up city records for old addresses. Hmmmm....maybe that is why??