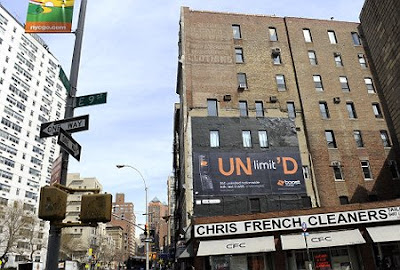 That's nearly the amount the city is fining a coop board, billboard company and two installers over a giant sign on a building near Astor Place.

More than 70 violations - totalling $955,000 - have been doled out over the single billboard, which the Buildings Department says violates zoning laws.

The groups slapped with the hefty fines call them shockingly high since signs have been plastered on the structure for more than 70 years.
Posted by Queens Crapper at 12:47 AM

Gee...
when the DOB deals with Queens
they let violators get away with murder.

But that's another story and another borough...isn't it though?

I guess the Tommy Huang's (and his likes) of this city are quick to grease the palms of those ever so willing crooked DOB building inspectors handsomely to look the other way!

Dry-cleaning was invented by accident in 1855 when the Frenchman Jean Baptiste Jolly noticed that a tablecloth was cleaned when his maid accidentally tipped over a kerosene lamp into it.

Today, dry cleaning is dry cleaning whether by a Frenchman, an Inuit or a Hottentot. However, a business with the term
"French Dry Cleaning" is a long-lived establishment in the neighborhood.

Now fill in the blanks:

I believe Chris French owns that establishment. Call him up and ask!

And I wonder if there is more to that story from G the A: What exactly was taking place when M. Baptiste--shall we call him A Man With a Maid-- and his lady friend "accidentally" tipped over the kerosene on the tablecloth? Hmmm?

Obviously a 70 year old 40 foot tall billboard is just the thing to be ticketed since DOB saw it for the first time yesterday. Perhaps the Benjamin Blindfold slipped.

Meanwhile, back at the ranch, people are being maimed, buried, exploded, burned, rendered homeless while the merry funsters we call developers roll on.

Signed, Lady whose livingroom ceiling kissed her livingroom floor, FDNY was there, HPD was there, but you were called first and never made it.