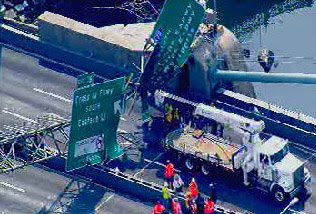 The Whitestone Bridge is closed in both directions after a painting truck with an extended crane struck an overhead sign on the Queens-bound side just after 1 p.m., a transit official said.

Traffic was being diverted to the Throgs Neck and Robert F. Kennedy bridges, said Joyce Mulvaney, public affairs staffer for the MTA Bridges and Tunnels.

Two contractors in the truck were reported injured though none of the injuries were life-threatening, Mulvaney said. They were taken to New York Hospital Queens for treatment.

"Something on the truck struck the sign," Mulvaney said. The sign, which displays electronic messages, fell toward the roadway.

Photo from Eyewitness News
Posted by Queens Crapper at 4:35 PM

one bridge cause such a mess in NyC

That was dangerous.. Luckily, the two contractors were not seriously injured.. They should still be thankful for that.. Hope the Authority could clear out the sign as soon as possible..

Don't you mean the traffic was diverted to the Triboro Bridge?

What happened? Did 2 ton tony and tony the hut both drive over the bridge at the same time?

Sophia Chang resurfaces -- she was at the Times Ledger with me 4 years ago.

georgethefetishist-
Don't get so hung up on *labels*, you silly materialist. You know what they meant.

Language has power. Under the Communists old folks were sent to gulags to die as counter-revolutionaries because they referred to a city as, "St. Petersburg", or "Leningrad" instead of "Stalingrad."

How many white people have nearly caused riots when the thought they were cool enough to use, "N*gg*r along with the rappers they hung out with.