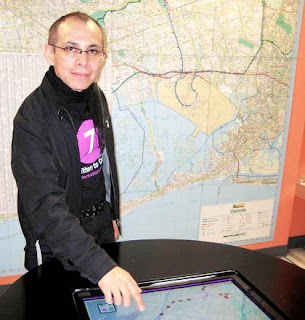 With a tap of a finger, individuals can listen to the music of the Romanian community living in Sunnyside or see pictures of Queens from the early 20th century at “Queens Beats,” an exhibit that opened Monday in the mall’s Queens Visitors Center.

Does this guy think that people who shop at Queens Center Mall don't realize that there are different languages spoken here and different ethnic enclaves in the borough? Sorry, but I don't get it. I bet borough hall funded this, too.
Posted by Queens Crapper at 12:07 AM

Yes, you can be Terrible Terri Osborne took taxpayer's money from starving worthy groups (that actually have some real talent) and pluncked it down on the typical heavy handed leaden political influenced junk that seems to pass for culture in this boro.

Ever notice? No one goes to these events, but with the stanglehold that boro hall has on this boro, no one will do anything to change this farce.

After the third decade of relentless use of the theme 'immigrant' in everthing from dining to tourism, it just might be a bit tiresome.

Hey Terry O, when is Bowne house coming back?

After 15 years of borough hall interference its a mess!

Why would Manhattan people come out here to hang with guest workers, maids, and gardeners?

Wasting money on this garbage while they are closing hospitals is obscene.

The pleasures of culture in a one party state:

Now you were in Brooklyn or Manhattan someone would do a Beep parody on Dear Leader.

Clips of city council in action, the democratic organization Christmas party, an award given by the Chamber on the Building of the year, painting bike lanes.

Good golly, with a tincture of creativity and imagination an award winning effort would result.

But this is Queens.

It would be considered inappropriate.

The sights and sounds, but what about the smells? How can we have an authentic multicultural experience without those vibrant smells?

What about those lovely touts (AKA Johns) on Roosevelt Avenue, that say "Chicas chicas chicas" when a male passes by? If we're going to have an authentic Queens experience, they should include those guys in this exhibit.

They have been touting this "sights and sounds of the 7 train" drivel for the past 15-20 years. The few midwesterners that I have seen over the years to be naive enough to travel off the beaten path, didn't seem too impressed with the vibrant diversity (filth and noise) of "ethnic Queens". As a matter of fact, they all seemed just a wee bit uncomfortable, out of place, embarrassed at being hoodwinked by the machine, and quite eager to get back into Manhattan. I wish these imbeceles who claim to be our leaders would finally wake up and get it; the masses are NOT crossing the river, no matter how you try to sell Queens. They will come and go to the airports, to the USTA or to see relatives. Then they will hightail it the hell out of here!

I wish these imbeceles who claim to be our leaders would finally wake up and get it; the masses are NOT crossing the river, no matter how you try to sell Queens.

I think Terri and the Pirates are actually marketing the boro to third world types looking to move in next to their coontrymen.

She is from the midwest and fully knows who will come and who will not come ... and who the real targeted market is.

Don't worry, unless its the sanitized waterfront, all you will get is riff raff making sure that its a 'safe' boro for the clubhouse.

Besides it starves funds from the real grassroots groups that are trying to change the tide and do the impossible.

You gotta hand it to them.

Marketing that slum under the el the 'International Express' is more creative than putting lipstick on a pig.

The way around this is simple.

Make the effort to contact the groups in the community directly.

DO NOT GO TO BORO HALL!

This exhibit belongs in Times Square or Grand Central, in order to encourage tourists ot cross the river, and learn about Queens.

Instead, the exhibit preaches to the choir by putting it for display before an audience of mostly Queens residents.

Also, who decided that Sunnyside is Romanian, or that Corona is Little Mexico? Other people live there too. My grandfather lives in Flushing, but he is not Asian.

Look at...then ADD UP the numbers!

Tourists haven't come to Queens
in the past nor will they be arriving in the future.

This "TOURISM" campaign hype mounted by "burro hall" is just to keep some folks in their high paying patronage positions for the years that they've spent dutifully ass kissing clubhouse pols.

Would somebody volunteer to publish these on QC?

Do you really think as a visitor spending hundreds of dollars a day to tour NYC I'd waste my time and money to make a side trip to a 3rd world borough to see the architecturally bereft sites where all our deserving landmarks once stood?

Nah.....I'll pass and spend my time
in Times Square, the South Street Seaport, Statue of Liberty
and the rest of the real attractions the "Big Apple" has to offer!.