400 city hospital jobs to be slashed 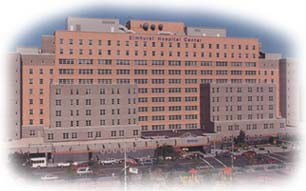 Citing “unprecedented financial challenges,” the New York City Health and Hospitals Corporation announced on Thursday a plan to lay off 200 workers and eliminate another 200 positions through attrition, part of a move to close a $316 million budget gap. The announcement touched off outrage within District Council 37, the powerful municipal labor union that represents the workers.

City officials said the job cuts were unavoidable and blamed the situation on a refusal by state leaders to increase Medicaid reimbursements to the hospital system.
Posted by Queens Crapper at 12:23 AM

Why do we cut police, firemen, hospitals, schools, but not development and City Planning?

Ask the mayor why he favors rich developers and not the people on your block?

THANKS TO THE BLOMMING ASSSHOLE MAYOR AND OUR BABLLING BLIND MAN GOVENORER , OUR CITY AND STATE HAVE GONE TO CRAP. IF THEY WANT TO CLOSE THAT 316 MILLION DOLLAR BUDGET GAP, I SAY START DEPORTING ALL THOSE ILLEGAL, UNDOCUMENTED IMMIRGRANTS WHO ARE NOT ONLY OVERCROWDING OUR SCHOOLS, NEIGHBORHOODS AND DRAINING. OUR MEDICAL FACILLITIES. WAKE UP, AND STOP IGNORING THE FACT THAT THESE PEOPLE ARE THE CAUSE OF OUR FINANCIAL PROBLEMS. THEY ARE A LARGE FACTOR IN OUR FINANCIAL PROBLEMS. MOST AMERICANS, AND LEAGALLY DOCUMENTED IMMIRGRANTS, HAVE MEDICAL COVERAGE AND FOR THE ONES THAT, USE WELFARE ( AS A STEPPING STONE IN DIFFICULT TIMES AS IT WAS INTENEDED WHEN CREATED) ARE NOT THE CAUSE OF THIS FINANCIAL MESS, BUT WE ARE THE ONES WHO ARE GONNA SUFFER FROM IT. IT IS OUR CITY, STATE AND ANY OTHER POLITCAL ASS HOLE WHO TURNS A BLIND EYE TO ILLEAGAL IMMIGRANTS. MAYBE THEY SHOULD COME TO QUEENS AND SEE THE DAY LABORORS ON SUNDAY WAITING OIN DROVES OF 30 TO 40, IN MANY SECTIONS OF QUEENS. FROM ASTORIA, JACKSON HEIGHTS, MAIN STREET AND SO ON. SEND I.N.S. OR I.C.E. OR THESE AREAS AND START ASKING PEOPLE FOR VISA OR DRIVER'S LICENSES? NONE OF THEM ARE HERE LEGALLY SO THEY NEED TO BE TREATED LIKE THE CRIMINALS THEY ARE AND BE LOCKED UP AND DEPORTED. A VOTE FOR MAYOR BLOOMBERG OR GOVENORER PATERSON, IS A VOTE FOR MORE SHIT LIKE THIS. VOTE AGAINST THESE ASSHOLES. VOTE FOR A BTTER TOMARROW. MAYOR BLOOMBERG HAS HAD HIS CHANCE, HE BLEW IT. HE LET THIS CITY GO TO CRAP. HE HAS DONE NOTHING THAT I CAN SEE TO IMPROVE OR PREVENT OUR FINANCIALS DIFICULTIES. AND HOW DID HE MAKE HIS BILLIONS? ON THE SWEAT AND QUAILTY OF LIFE OF ALL OF US NORMAL NEW YORKERS......... TIME FOR HIM AND PATTERSON TO GO. DON'T LET THE DOOR HIT YOU GUYS ON THE WAY OUT.

Sometimes you wonder if the clubhouse posts just to make us look like a sterotype unworthy of serious consideration.

Simply Take it all away place the army on standby till they go home.

Sorry,....I know this sounds bad, but it is a big factor in why the health care system can't survive.

Cut hospitals to pay for bike lanes and trees for new development.

Of course the big problem with cutting health care to anyone is that epidemic disease does not stay quietly in its own little corner.

See any good history of "Typhoid Mary" for further illustration.