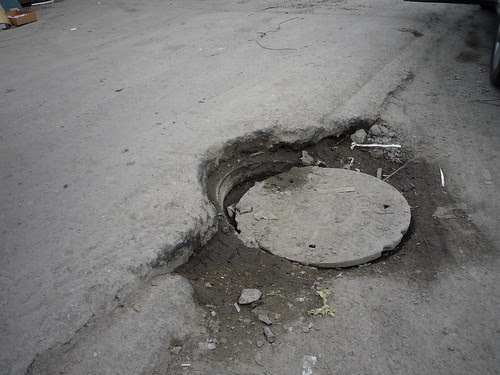 Willets Point United has a post called "Phases of the Manhole Cover" which is meant to be tongue-in-cheek, but when you think about it, really is sad and disgusting.

And according to Uniwatch, there was a giant flush near the Flushing River Saturday. But after detailing the experience, Paul Lukas goes on to opine:

...Shea was completely isolated in its own little space, largely cut off from the surrounding community. But as you can see in that satellite photo, the new stadium is in Shea’s old parking lot, which means it’s right on 126th St. — and 126th St. is the western edge of the Iron Triangle, a glorious mess of auto salvage shops, muffler shops, tire shops, and so on, most of them housed in rusting Quonset huts. It’s a gritty but vibrant scene, which of course means it can’t be allowed to exist next to the Wilpons’ new toy, so the city is in the process of condemning and redeveloping the Triangle. This will eventually result in dozens of businesses being forced to close, but for now the Triangle is still going strong. So when the Wilpons look across the street from their shiny new stadium, this is what they see, and I bet it bugs the shit out of them. Or at least I hope it does — serves them right.

Don't forget that the workers and owners in the Iron Triangle have to look east at the boondoggle stadium, built with their money - saved up by the city from NEVER delivering ANY normal services to that generously taxpaying group of thriving businesses.

Commissar Death and Taxes wanted to help the extremely wealthy Wilpons earn far more money than even the AIG Bonus Recipients. And, the Wilpons didn't have to do anything except see to it that the Commissar gets his take and even there, make the fans pay that tab, too.

Bilking the taxpayer is Commissar's entertainment and sport. Screwing the families, businesses and workers in the Iron Triangle is his way of having a little fun with the little people.

Willpon's Mets should be carrying the full freight of paying for the new stadium - why is the taxpayer doing it for him? We should derive a share of the profits or own the team o subsidize the construction cost of Citi (sic) field.

It is the Willets Point buisnesses that should be up in arms as the closer staduim will clog up the street even more and fans may injure themselfs when they run into the giant gully pictured in the blog or ruin K's of oil pans, axels etc - maybe good for Willets Point, huh?

Your congressman, senator and president are saying that, since taxpayer money went into AIG, it is now the property of the taxpayers.

Well, the taxpayers spent money on the two stadiums. So, we are the owners. We should enter the stadiums whenever we like free of charge.

If we own AIG, then we own the two stadiums.

As a matter of fact, the Chinese people and government own them too, since they purchased our government. They certainly paid for our/their politicians.

serves them right.
well said and the taxpayer all good points

and the mets suck junk yards for ever

Anonymous said...
and the mets suck junk yards for ever

So do the Yankees.

Look at what's being done to a lot of PUBLIC PARKLAND in the Bronx to build their mausoleu....I mean, Stadium.