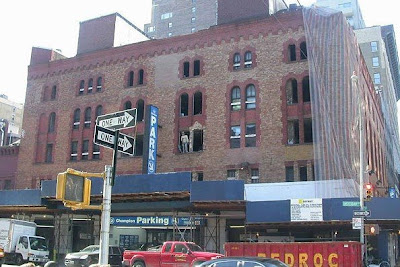 Hours before the sun came up on a cool October morning in 2006, people living near the Dakota Stables on the Upper West Side were suddenly awakened by the sound of a jackhammer.

Preservationists lost a battle to protect the Dakota, built in 1894 and shown here in 1944, after the owner secured a stripping permit.
Soon word spread that a demolition crew was hacking away at the brick cornices of the stables, an 1894 Romanesque Revival building, on Amsterdam Avenue at 77th Street, that once housed horses and carriages but had long served as a parking garage.

In just four days the New York City Landmarks Preservation Commission was to hold a public hearing on pleas dating back 20 years to designate the low-rise building, with its round-arched windows and serpentine ornamentation, as a historic landmark.

But once the building’s distinctive features had been erased, the battle was lost. The commission went ahead with its hearing, but ultimately decided not to designate the structure because it had been irreparably changed. Today a 16-story luxury condominium designed by Robert A. M. Stern is rising on the site: the Related Companies is asking from $765,000 for a studio to $7 million or more for a five-bedroom unit in the building.

The strategy has become wearyingly familiar to preservationists. A property owner — in this case Sylgar Properties, which was under contract to sell the site to Related — is notified by the landmarks commission that its building or the neighborhood is being considered for landmark status. The owner then rushes to obtain a demolition or stripping permit from the city’s Department of Buildings so that notable qualities can be removed, rendering the structure unworthy of protection.

Hey, NY Times, in your next article, you should explain why sites in the other 4 boroughs don't even get as far as "considered" by LPC. The Post's Julia Vitullo-Martin lists some to save today.
Posted by Queens Crapper at 12:02 AM

Its time to clean house at the LPC.

Folks, this has been the situation for decades. And no one seems to have found a solution?

Time to clean house across the board! All of 'em!

Compared to far superior historic/architectural treasures in Queens that have already been demolished because they were considered unworthy of designation by the LPC, the Dakota Stables pales.

It's a rather run of the mill piece of 19th century nothingness.

The noise being made by "preservationists" is very loud because it's located on the golden isle of Manhattan!

Move to Queens and take the lion's share of lumps!