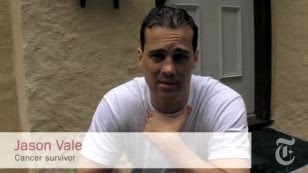 Mr. Vale, 40, grew up in Whitestone, Queens. He excelled on the handball court, in neighborhood pool halls, and on the drums in his church band. But his real forte was as an arm-wrestler. He captured city, state, national and world titles throughout the 1980s and ’90s.

He also beat cancer. Twice, doctors told him that he had fatal tumors. And twice, he survived. The second time, he refused radiation and chemotherapy in lieu of an alternative treatment consisting of eating apricot seeds. The seeds have laetrile, which some people consider an alternative cancer-fighting agent — and the government considers a fraud.

Federal Food and Drug Administration officials warn that not only are the seeds not a cancer cure, but that they may contain harmful amounts of cyanide. Agency officials accused Mr. Vale of profiting from desperate cancer victims, and in 2000 got a court injunction to stop him from selling the seeds as a cure. Mr. Vale changed his marketing and had relatives handle the seeds, but he was arrested and, in 2003, convicted of criminal contempt of the injunction and sentenced to five years at the Federal Correctional Institution at Fort Dix in New Jersey.

“I want to be No. 1 again, not for myself, but as part of my mission to show the world the power of apricot seeds,” he said recently at his house in Bellerose Manor, Queens.

Mr. Vale is up against an old foe again. He has a tumor in his kidney for which he is refusing standard medical treatment in lieu of the apricot seeds.
Posted by Queens Crapper at 12:47 AM

What scientific investigation of laetrile has been performed by the government or medical "profession"?

This has been all about money and a stubborn refusal to permit any medical "outsider" to discover or promote a cure for anything.

Anyone who has contempt for the union mentality that keeps non-union workers off the job should understand that unions are pikers compared to the power of the medical "profession".

The word: "breakthrough" means: "any significant or sudden advance, development, achievement, or increase, as in scientific knowledge or diplomacy, that removes a barrier to progress". In this instance, the barrier is the medical "profession".

By the way, check this out: all the agencies, federal, state, and local that deal in matters medical are staffed and managed by - oh, you'll never guess! - DOCTORS.

So, the medical schools, books, regulatory agencies, practitioners, and those who testify in court, all read the same material and believe the same things. Most doctors have the imagination and intellect of worms.

As long as there is federal money (your money) funding cancer research, and as long as that money keep flowing, the medical researchers will have no motive or incentive to ever have a breakthrough.

There IS a great deal of money in the problem. Any solution will dry that money up.

So, the medical schools, books, regulatory agencies, practitioners, and those who testify in court, all read the same material and believe the same things. Most doctors have the imagination and intellect of worms.

Apricot seeds are nuts. We take them everyday for the last year as a preventive measure for cancer. Whether it works or not it makes no difference to us because we eat 10 a day. If you like eating nuts than eating 10 apricot nuts a day is not going to harm you.

If you eat apricots, when you get to the pit, crack the pit open and you will find a nut inside. That is all it is.

I have researched this and they say to eat 10 nuts a day for a preventive measure and 30-50 nuts a day if you have the cancer.

The nuts are very bitter. The bitter the nuts the better. We order the nuts though the Internet and e order organic nuts. Regular apricot nuts run about 8 dollars a pound on line.

This guy really did go to jail for selling apricot nuts as a possible preventive measure against cancer. Our government decided to put him away for selling them. You have to ask yourself with people committing unthinkable crimes why this case was so personable to the justice department that they needed to arrest, put on trial to convict and than sentenced to 5 years jail for not verbally saying that these nuts do not help with people with cancer.

After reading that I have to imagine that these nuts do something for people with cancer, otherwise why would the government go through such lengths and financial strains to put this guy in jail for not saying they do not help people with cancer.

There is something very fishy with the FDA that they know something about these nuts they do not want us to know about. Mr. Vales grandmother confirmed the story and she stands by her grandson and is also a very nice woman. But with cancer making so much money for so many people and companies you have to ask yourself what a cure would do to hurt the financial status of all the companies and drug companies that profit from cancer and what would happen to the millions of jobs that would be lost with a cure. Conspiracy, possible, but unlikely. It only makes sense that after a half of a century of searching for a cure that a cure has to be out there somewhere but is hidden for fear of the mounting loss that many industries would face after the cure comes out.

Take the nuts. The only harm they can do to you is that you ate bitter nuts, that's all. If they do help than people can benefit greatly and live with decency and longer. Go on line and buy them and eat them as a preventive measure that's all.

From Brasscheck video: The opinion of an MD and oncologist
"Treating" cancer is one of the most lucrative business on earth.

For years, cancer has been called a "mystery."

After spending billions of dollars over many decades, the medical establishment claims not to know the cause of cancer, not to understand its nature, and can only offer expensive and invasive treatments like radiation and highly toxic drugs to treat it.

The strikes me as willful stupidity that conveniently happens to generate many billions of dollars each year that is spread out annually among many tens of thousands of employees of the cancer industry.
Also Check out Hoxsey: Suppressing cancer research
Harry Hoxsey's treatment for cancer was endorsed by senators, judges and even some doctors. Two federal courts upheld its therapeutic value and by the 1950s his clinics were found in seventeen states. It spite of this, the AMA targeted him and drove him out of business.

If a low cost, reliable treatment for cancer were discovered outside the medical establishment would the general public ever find out about it?

Watch this film and find out.
The AMA at its worst

Hoxsey: How Healing Becomes a Crime

Laetrile was extensively researched over several decades and shown to have no value as a cancer treatment. You can look up the results of numerous studies online.

You guys criticize the medical profession as if it were all one big conspiracy, but anecdotal cures, quackery and pseudoscience are not a viable alternative.

*You guys criticize the medical profession as if it were all one big conspiracy, but anecdotal cures, quackery and pseudoscience are not a viable alternative.

Yes there are great things about western medicine but chemotherapy kills more people than it possibly helps.It destroys your immune system.Without that you cant retain nutrition.The pharmaceutical industry and AMA are very powerful and dont want there dollars taken away.

Chemotherapy may kill some people, and fail to save many more. However, it often works. Unlike laetrile, which has been shown to have no medical benefit whatsoever.