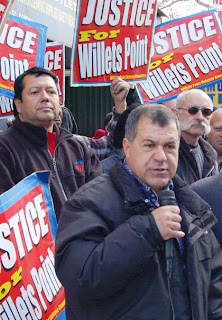 NY1 broadcast footage of Olaya painting over Monserrate’s name on the day of the City Council vote on Willets Point — one day after the councilman had agreed to support the project after negotiating a deal to boost the affordable housing component in the city’s plan.

Monserrate’s chief of staff, Julissa Ferreras, said Monserrate does not own the truck, although she would not say who did, and neither Monserrate nor the driver of the truck pressed charges over Olaya’s actions.

“Hiram never asked to have charges pressed,” she said. “The councilman definitely did not want to press charges or has [not] pressed charges. It was totally the precinct’s call. I guess if they see that a crime has been committed — and I think it was obviously the NY1 video — then they have to act.”

Ultimately, Olaya said no charges were filed against him and he was released after having his fingerprints and photograph taken. Olaya said after he asked for an attorney, the officers said they were holding him based on two previously unpaid tickets. Olaya said the officers never showed him the tickets, but eventually released him when they confirmed they had, in fact, been paid.

You can't even get the NYPD to respond half the time when you call them directly, but we're supposed to believe that they are sitting around watching NY1 and just decide to go pick someone up when no one wants to press charges. Yeah, okay.
Posted by Queens Crapper at 12:13 AM

Please tell us all what constitutes "harassment" in the events you outlined.

I'd say going out of your way to hold someone for hours when no one was pressing charges against him and then lying about him having unpaid tickets constitutes harassment.

When there's no complainant, there can be no arrest.

The police cannot be both the complainant and the arresting agency.

But, Commissar Death and Taxes has his own law, and sends out the Brownshirts to HARASS private property owners into bending to his will.

Isn't unchecked power great? The power to use the police to increase personal wealth?

This guy commits a crime by vandalizing a truck that wasn't his, gets arrested, and you try to spin it as police harassment. Shameful.
Taxpayer, go to law school before you embarrass yourself trying to explain criminal procedure.
- A Bigger Taxpayer

Actually, he didn't get arrested, they just detained him then let him go when they ran out of excuses. No charges, no court appearance, no handcuffs, no perp walk, no DA press release...hmmm.

That no xhargesvwere filesd does not mean a crime was not committed. The police acted properly in investigating a crime that was broadcast on NY1 for all to see

"Taxpayer" is a rabble rousing fool and takes pleasure in making up unsubstantiated, outrageous allegations while disparaging public servants.

"That no xhargesvwere filesd does not mean a crime was not committed."

Yes it does. If the aggrieved party is saying no crime was committed, then the police should not be wasting their time and our money "investigating" at all. Maybe they should instead be responding to calls about real crimes.

Holding someone over parking tickets that were paid is just sad. If Hiram were not an ex-P.O. this would not have happened.

"arrest" = not free to leave, not Criminal charges. He WAS arrested, but he was not charged

They told him to come down to the precinct and he was questioned. Whether there was a technical arrest is not the issue, the issue is why police thought it so important to address this with no one pushing for it while they ignore all the other problems in the 110, and there are too many to list.

A guy went on a killing spree in FMCP and it took forever for the 110 to do anything about it but they sure know how to take care of graffiti on private property when no one is complaining about it.

No one complained about it on the record. But someone did complain. I'll just leave it at that.

So if a woman is being beaten by her husband and is too afraid to file a complaint, but the police know and have evidence, they should just ignore it, according to Taxpayer.
Genius.

You need a witness, i.e. the wife needs to complain.

These days the cops arrest both of them regardless.

Yeah really if the wife isn't going to testify against the guy, then what will the cops accomplish?

If he hits her in public and a police officer witnesses it, he is arrested and charged regardless of whether the wife testifies.

That's not what happened here.

And the charges would be dropped when she refuses to cooperate.

If a cop saw a guy slap his girlfriend on a video, he wouldn't seek him out.

Exactly, but we are supposed to believe that the police have nothing better to do than watch TV and find the guy who painted a truck that no one seems to care about. The whole thing is ludicrous.

Spin it however you want, but you don't get this type of reaction out of cops when you call 911 with graffiti in progress. I did that once and was left waiting for 2 hours as cruiser upon cruiser drove past me (and not with their lights on) and none of them stopped. They could have gotten a real vandal off the streets but apparently weren't interested.

And it doesn't change the fact that this is not how cops typically react to graffiti and that a phone call was made to get the cops to harass the guy who did it.

what proof do you have that

"that a phone call was made to get the cops to harass the guy who did it."

none? I thought so

The police DO NOT work very hard for the average taxpayer.

They're employed to swiftly respond to and protect the wealthy fellow's interests....paid for out of the working man's pockets.

Let the rich hire their own private security force!

I doubt Hiram's status as a former police officer carried much weight. He was no more than just a low ranking patrol officer, and not a very good one, nor a very well liked one for that matter.