He can't be bought, but he can buy everyone else 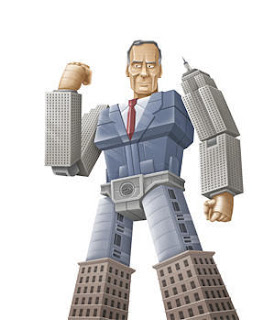 For a real education on what has taken place over the last few months, take some time out of your busy day to read the whole article linked to below:

Even his strongest allies have a hard time naming a memorable achievement from Bloomberg's second term—beyond his sparking a national gun-control campaign. Instead, he was fixated for most of the last two years by an always-improbable, yet ballyhooed pursuit of the presidency, followed by a largely unnoticed, two-month-long audition for the consolation prize of vice president.

In one of the most sordid performances by a city executive in modern history, Deputy Mayor Kevin Sheekey appeared on NY1 in May to declare that "the person who picks Mayor Bloomberg as their vice-presidential candidate wins the election," partly because Bloomberg would "help finance a campaign" with "between zero and a billion" dollars. This televised and indiscriminate bribe offer generated no takers and, more remarkably, drew not one word of fire from the city media.

The Transformation of Mike Bloomberg

The Bloomberg who came into office as the anti-politician, promising to transform city government, has been transformed himself. Some of us liked him precisely because his wealth insulated him from the kind of horsetrading that diminished his predecessors. But seven years later, Bloomberg has not only proved himself to be a master politician, as hungry for power as anyone we've ever seen, but he's also ended up putting nearly everyone who deals with the city deep into his political debt.

The New York City Campaign Finance Board (CFB), which the Times has called the "crown jewel of city political life," was compelled by the mayor and Quinn—who, together, appoint its members—to issue the "draft" of an advisory opinion designed to push undecided council members into the "yes" column. The board assured the council that if the extension passed and a member decided to run for re-election, the thousands of dollars that some term-limited members had already spent in seeking higher office would not count against their cap in a new council race. But it wasn't the substance of the ruling that was dismaying—it was the timing of it. According to sources close to the CFB, Bloomberg and Quinn staffers demanded that the board act before the council vote, with Quinn threatening to pass a similar bill—but with detrimental consequences—if the CFB failed to act. Asked twice if Bloomberg aides had lobbied the board to issue this unprecedented opinion in anticipation of a legislative vote, executive director Amy Loprest dodged the question and finally said: "I can't comment on that." Bloomberg even sullied his own charitable generosity, summoning nonprofits he funds to council hearings to pay homage despite their tax-exempt status, as if there is now a turnstile at his supposedly "anonymous" foundation.

Mario Cuomo trudged down to testify for the extension without revealing that the managing partner at his law firm is a director of Bloomberg L.P. and that the company is the law firm's top client. Ed Koch went from hosting his weekly show on Bloomberg Radio to celebrating the prospect of a third Bloomberg administration. Peter Vallone, who insisted when he was speaker that the only way to undo term limits was by referendum, switched sides without mentioning the $1.8 million in fees his family firm collected last year for lobbying City Hall (to say nothing about his son keeping the family seat). Five unions with fresh new contracts, thanks to Mike Bloomberg, rushed to the witness table, some closing their deals right before and some right after their appearance. Time Warner's Richard Parsons did a stint at the hearing and on his own channel (NY1), even while the Bloomberg administration was extending the company's lucrative cable franchise for six months and considering a 10-year renewal.
Posted by Queens Crapper at 12:59 AM

One could make a credible argument that the latest move by Bloomberg with his sidekick Christine Quinn was more reminiscent of Venezuela's Hugo Chavez or Russia's Vladimir Putin than it was democracy in action. It's time to send both of them looking for new jobs!

wow how true - he bought willets point too with his under the table deal with monster-rat and the council. i mean how do you go from having 38 people on side to losing 42-02 in 1 week?

Yet another Bermuda crook. They aughta shut that place down.

There's an interesting article about Bloomberg News (which seems to be the only News company that is doing well financially) in the December issue of Vanity Fair:
http://www.vanityfair.com/politics/features/2008/12/bloomberg200812

**Venezuela's Hugo Chavez or Russia's Vladimir Putin than it was democracy in action. It's time to send both of them looking for new jobs!

Tell me about the dictators and death squads in Venezuela put in power by secret U.S. policies of the past.
Bloomberg is more like right wing Berlusconi in Italy or Putin.

Mayor Edward I. Koch clearly has a conflict of interest and should leave NY1's 7PM show hosted by the great Dominic Carter. Mario Cuomo for shame--and i admired him! And Pristine Quim, worst of all--the City Council is supposed to be a checks & balances body that keeps City hall in line. Begin there. End her reign as head of the council and much will fall. Depose Pristine Quim!

The great Dominic Carter? Wow, grading with a curve, or are your standards that low?

Mayor Edward I. Koch clearly has a conflict of interest and should leave NY1's 7PM show>>>>

Shove an apple in his mouth and serve him up as the well roasted pig that he is (with a sprig of Rosemary up his ass)!

Wadda ya think Lydia...
some nice dry Chianti to accompany the holiday fare?

A self made man who was strong enough to hold the two-bit hacks from the clubhouse with (entirely appropiate) disdain.

Sadly, that also reflects how he holds the general public.

A poster child for the excess of the Bush era.

He could have been a great man.

I Hate this bastard as much as living N Shore Long Island.

If TONY AVELLA becomes Mayor I'm selling both joints and moving back to Ridgewood or MV.
I rather put up with PR's Slavs and Poles then Mid Eastern Jewish or Buks.

One of my best memorys of Seneca Ave was Aldo the German cursing chaising Armondo the PR's rooster around with a butcher knife. Then the cat ran through the wet paint making footprints on the cars
....Ridgewood was interesting