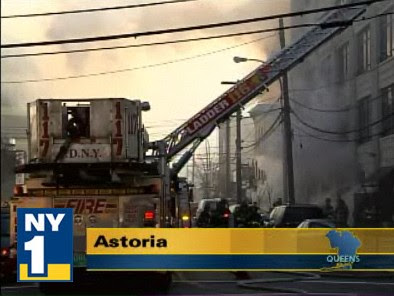 Hundreds of firefighters battled a four-alarm fire in Queens Saturday.

It broke out around 11 a.m. on the first floor of a five-story commercial building at 37-01 31st Street in Astoria.

Fire officials say combustible materials in the building, such as paints and wood, created an explosion and the second floor collapsed.

Some workers on the third floor were able escape by climbing down a ladder.

Fire officials say while everyone made it out safely, six employees were injured and at least four firefighters with minor injuries were taken to the hospital.

Officials were still investigating Saturday night what caused the fire.

I can't imagine why this happened. I'm sure everything at this worksite was strictly kosher and up to code and that the sprinklers were working. This building has a spotless record.

According to Fox 5, "The fire was apparently sparked by construction workers making repairs inside the building."
Posted by Queens Crapper at 12:00 AM

Like all the projects in Astoria, they have been working on this for years.

Likely the guys were part of the local talent, under funded, inexperienced, but well connnected.

open up E-261......first Guliani close's it, then Bloomberg. Maybe the next Mayor can re-open it.

why did they close the dutch kills firehouse if they anticipated large growth?

OK, I work across the street. My building is owned by the same Relater. His name is Steve Veliotis and he owns Alma Realty. The GC is his terrier named Tony. All the labor are spanish (only) speaking day-laborers. They did my building and do shotty work but are at least legal (Yeah, right). I would not be surprised if this was a stupid accident as they don't even know what OSHA is. I have never seen an inspector in all my years of working there. They building was a new renovation and mostly empty. The landlord moved their offices into the top floor of that building about 6 months ago. They dont go out of their way to brake the law but they will cut any cost possible. I know this for a fact. I did not go to work today for other reasons but I cant wait to hear the buzz in my building 36-36 33rd street, across the street.

In western Queens you dig a hole and stripmine the community.

Then take the money and run.

All the building renovations, permits and C of O should be checked for compliance as well as all exits, sprinklers and alarms, and if there are violations, extreme fines should be imposed and the corrections would need to be made. Now that there was a fire I am positive these corrections will be made. Thank God noone was injured.