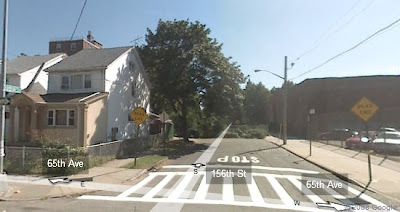 * A handprint helped cops track down a thief who swiped four tires from a parked car in Flushing.

The owner of the vehicle called cops after he found all four tires and rims had been stripped from his 2008 Honda Accord while it was parked on 65th Avenue near 156th Street, shortly after 11 p.m. on Sept. 22.

Police examined the car and found a right palm print on the front fender of the vehicle, sources said.

Cops used the print to identify Angel Martinez, 24, linking him to the crime.

He was arrested on Tuesday and charged with grand larceny, said a spokesperson for Queens DA Richard Brown.

* A man was carjacked while sitting in his luxury vehicle in Richmond Hill.

The victim, 31, told cops he was sitting behind the wheel of his 2002 Mercedes with a female acquaintance, 29, on 92nd Avenue near 112 Street, at 1 a.m. on Nov. 14, when a man walked up to the driver-side window, tapped on the glass with a gun and ordered the driver and his companion to get out, sources said.

The robber snatched two cellphones, an iPod, $20 and the driver's keys, then climbed behind the wheel and fled in the car, court papers revealed.

Cops arrested the alleged robber, Asa Sparkes, 22, on Nov. 18. He was charged with robbery and grand larceny.
Posted by Queens Crapper at 12:49 AM