In a portion of this NYT article concerning where a new soccer team may play, the commissioner of Major League Soccer is asked about an agreement with the Mets to bring soccer to Shea:

Q: Last year, you spoke in public about your hope that the owners of the New York Mets would bid for a team. But they are absent from the current round. What is the story of that situation?

A: I never, ever expected the Mets to be involved in this round. They can’t have a new stadium ready for 2011. We continue to meet with the Mets as they look at possibilities in Willets Point. I never expected them to be ready to play in 2011. Where would they play? And the redevelopment project at Willets Point could take years. We don’t need to do it faster, we have to ensure that what we do is strategic and involves good decision making.

What "possibilities in Willets Point?" The redevelopment authorized by the Council does not include any new sports venue. Or, was that a smokescreen? Interesting how the Times didn't ask follow up questions about this.

And now on to who will develop the Point...

Why is Council approval of developer selection at Willets Point crucial? Because in the most recent RFP round for the Willets Point redevelopment, EDC has selected as a "finalist" TDC International -- the same firm that cannot successfully execute the relatively small Municipal Lot 1 project in Flushing.

Since being selected as the Muni Lot developer in July 2005, the site remains untouched, and according to many the project is dead. TDC certainly has reneged on its original plan for the Muni Lot site, prompting Councilman Liu to say: "The developer seems to think it doesn't need to deliver on the promises it made two years ago. That's at best a woeful miscalculation and at worst just pure greed." (TimesLedger, Oct. 11 2007)

Given TDC's bad faith with the community concerning its Muni Lot 1 project, obviously TDC is not to be trusted concerning the massive Willets Point project.

Coincidence, that just prior to the Council's Willets Point vote, a press article appeared that would reassure Council members concerning TDC? The article ("Flushing Commons On Track"), unambiguously states that TDC's Michael Meyer said that CPC would certify the Muni Lot 1 project on November 17.

That article appears designed to rehabilitate TDC's reputation in the days prior to the Council's Willets Point vote. November 17th has come and is gone and there was no certification of the Flushing Commons project.

TDC now lists Willets Point as one of its "Current Projects" at its web site.

Also at TDC's web site, you can read about the majority of TDC's past and future development projects in China, and how TDC established itself in the United States.

The Council's decision to risk $400 million taxpayer dollars on Willets Point at this time of economic crisis makes better sense if Council members have been assured behind closed doors that a developer is already in place, together with financing. [The developer could not be selected prior to the Council's vote because had the developer been selected, then the Council would have authorized the use of eminent domain to seize private property to be handed directly to another private party, which EDC knows might not survive judicial review. But if the property is seized only for a generic City project, with no particular private party to benefit, that removes one legal basis for the present landowners to object to the seizure of their land.] 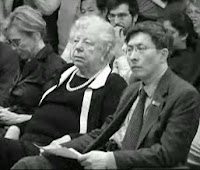 Wellington Chen, formerly TDC VP, was invited by Claire Shulman to sit next to her, as she unlawfully lobbied on behalf of the Willets Point redevelopment at City Hall on November 29, 2007. Chen also sat with Shulman during CB7's Willets Point vote on July 1, 2008. In this 2005 interview, Chen argued that Flushing's fate is tied to Willets Point.

"People think that Flushing is the heart of this area. In reality, many have recognized that the Shea Stadium area is the heart. Willets Point is the heart. And Flushing is the eastern lung and Corona and Eastern Elmhurst and Jackson Heights are the western lung... A solution for Flushing lies west of the Flushing River... This river has two banks, but until the other bank is decided, we are in a sort of limbo — we can’t clap with one hand."

When asked during a meeting of CB7 when considering the Willets Point ULURP application, EDC could not guarantee that the developer to be selected will be an American firm, only that it/they will be "well-known players," or some such words. So, eminent domain might have been authorized to wrest the land from its present American owners and businesses, to be handed to a non-American developer.

THIS HAS BEEN SET UP FROM DAY 1 WITH CLAIR NEGLECTING WILLETS POINT AND THEN COMING IN TO BE A SAVIOR MR CHEN MEANWHILE IS THE SLEEZIEST DEVELOPER AROUND AND FOR HIS SUPPORT OF CLAIRE WILL WIN THIS BID, OH DID I SAY BID? THIS CITY IS DESTROYED ITS ALL ABOUT $$$ NO MORALS ANYMORE TAKE-TAKE-TAKE AND IF I LOOSE $$$ THEN HAVE THE TAXPAYERS BAIL ME OUT . SORRY BUT UNTILL WE THROW THESE PIGS OUT OF OFFICE THIS IS WHAT WE WILL DEAL WITH EVERYDAY THEY ARE STILL HERE. IF YOU VOTED FOR EMINENET DOMAIN THEN YOU MUST BE VOTED OUT !!

what a conspiracy theory.

Claire Shulman should really invest in a good spanx.

NYC is run by pigs.

That sharp "little duke of" Wellington sits besides the corrupt looking wreck Shulman...
who now appears to be a veritable living female portrait of Dorian Gray.

Somebody (like the FBI) ought to go back to the 1970s and look into a possible Manes and Chen connection!

The idea of "developing" WP goes way back to the days of "the Donald" (his original Grand Prix racing scheme etc.)!

Maybe Manes' "suicide" was at the "behest" of some Taiwanese boys!

Claire (and maybe Myra Herce) know where all the old "bodies" are buried (politically speaking, of course)! They were around at the time.

It's funny how Rudy Giuliani didn't subpoena Claire (which would have been SOP for any prosecutor) when he was on Manes' case!

She eagerly supported his run for mayor soon afterwards.

Perhaps that was her reward for
not being questioned about her old boss' involvement in that infamous PVB scandal and her possible complicity.