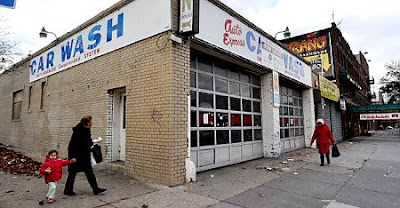 A plan to build a public school in Bay Ridge has drawn the ire of several Fourth Ave. property owners whose land could be seized under eminent domain, officials said.

The move to clear land for the 480-seat school would mark the first time the School Construction Authority has had to resort to the controversial move of seizing private land for a government project.

"We're still in negotiations, but we also are prepared to initiate eminent domain proceedings so we don't lose time," said spokeswoman Margie Feinberg, who could not recall another instance of land seizure being used for a school project.

The possibility of eminent domain - which is typically used for projects that would benefit the public - has put plans for a grocery store and medical center on hold for the swath of Fourth Ave. between 88th and 89th Sts.

Jimmy Anagnostakos, who is part-owner of a shuttered car wash, said he has been in talks with Key Food about building a supermarket on the block. He said a food market was badly needed in the neighborhood.

Peter Pantelidis, who owns a parking lot on Fourth Ave., says he already sank $50,000 into architectural designs in a bid to build a medical center on the block.

Have we overdeveloped so much that we can no longer find vacant property for things like schools?
Posted by Queens Crapper at 12:09 AM

"Have we overdeveloped so much that we can no longer find vacant property for things like schools?"

The same situation is facing the New York City Housing Authority since the Guiliani adm sold-off most city owned parcels.

He and his Republican landlord friends were only too anxious to get their hands on those properties, now with a growing need for public housing and schools, guess some of these private interests are going to get gored.

Schools are zoned based on population density and there is no good reason to allow some private landlord to hold the public interest hostage in order to extort unreasonable sums from "us" -the taxpayers.

In these cases, eminent domain is a useful hammer, it keeps people reasonable.

Eminent domain is criminal and must be overturned at the Supreme Court level.

"Have we overdeveloped so much that we can no longer find vacant property for things like schools?"

How obvious is that?

If you have a home, walk out to the curb and take a look in either direction. NOTHING is safe; nothing is guaranteed. The Kelo decision and the way it is interprteed by this mayor means they can take any parcel or combination of parcels at will--meaning "at deal with developers." This is Russia. A damn shame. A man's home is Mayor Mike's castle.