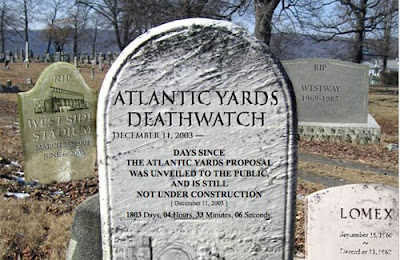 It just ain't gonna happen. Willets Point will be added to the graveyard eventually. Click photo for website.

And these folks make a good point:

Perhaps the MTA wouldn't be in such dire straits and sticking it to New Yorkers had they not done dumb real estate deals. For example, the MTA has an agreement to sell the 8-acre Vanderbilt Rail Yards to Bruce Ratner for $100 million (no money collected yet) leaving $150 million on the table from Extell Development Company and, moreover, the $214.5 million the yards had been appraised at.

That's a minimum of $50 million the MTA turned down on just one deal. No wonder New Yorkers now have to pay.
Posted by Queens Crapper at 12:59 AM

I hope that they start making more imaginative use of the MTA's real-estate and development funds. Atlantic Yards should be built over sunnyside yards, where there's be no evictions or demolitions necessary. (the junk yards at Willette's point should be moved to New Town Creek Maspeth/Sunnyside/Woodside.

Atlantic Yards shouldn't be built at all. The Nets don't want to come here and we need more green space in this city, not a bazzillion more people. Build the infrastructure first!

Love the death-watch site - the clock will stop soon for Atlantic yards. BR won't build unless he gets $$ from State. No money there and politically untouchable issue to give or promise any credits for building. It's totally a private development that is uber-unpopular and uneccessary.

Your language skills need some polishing too.

For example your usage of:

C'mon now fella.
Get with the program!

The Nets WANT To move.. Their cheapskate owner doesnt want to do it unless The City and State pay for it.

It just ain't gonna happen. Willets Point will be added to the graveyard eventually. Click photo for website.
--------

Not the East River waterfront or the Astoria peninsula.

Everything is fasttrak there. Dutch Kills here we come!

Olaya was busted last night
someone high up in nypd saw him on ny1 vandalizing hiram's campaign bus and decided a crime was committed, he was released and issued a bench ticket. hiram called kelly to complain.

I wouldn't be surprised if this order came from city hall to suppress and intimidate arturo's group.

hiram useing his power to fuck up the chop shops ,hear come the law suits to stop willets point

Still building at Hutners Point. The Ledge has it as front page news.

When does reality catch up?!?!?

or does it ever?