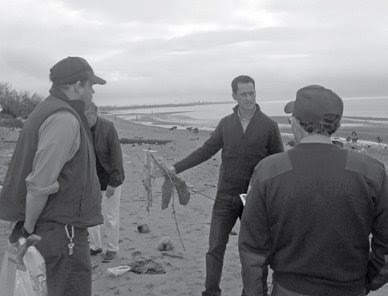 Hey remember back in August when I wrote that leaving "religious" crap on the beach is littering and certain commenters went apeshit? NY Magazine didn't like it, either... they said the Crapper was "showing his nativist colors again."

Well guess what, NY Mag, et al? Now you can write that crap about Anthony Weiner, darling of the leftie libs:

Congressman Anthony Weiner (D-Brooklyn, Queens) organized the cleanup on the beach, which is along the Jamaica Bay and is part of Gateway National Park, last Friday. When he arrived, he found that the problem extends far beyond discourteous fishermen or beachgoers. Instead, the beach was littered with red and yellow flags, dozens of coconuts and other remnants from religious ceremonies performed by Hindus and other groups.

“At the end of the day, enforcement needs to be done.” He admitted that prior to his visit, he “didn’t fully grasp that there are chronic offenders” who are leaving behind a “shrine of garbage… in the name of religion.”

While the religious followers believe they are making offerings to the sea, Congressman Weiner had a different view. “They are essentially throwing garbage into the water,” he said, holding up a handful of debris.

“There has to be some sense that this is a national park. We want people to enjoy it, but there has to be a balance,” he said, adding that individuals who leave trash behind are “abusing their rights as visitors to the park.” He called upon park police to begin “regular enforcement,” including issuing tickets to offending visitors. “The people are not the issue,” he added, wondering aloud, “Is it legal to cut the head off a goat in a national park?”

Here's more from the Daily News and the Queens Chronicle.
Posted by Queens Crapper at 12:36 AM

The goat head probably came from the Santeria voodoo crap.Let people lay a wreath but pick it up and enforce that.Do park police or cops enforce that or do they wait until its a complete mess.I guess so because ive seen numerous cars right in front of police cars by Queensboro plaza run red lights.

When will the police hand out tickets during Succoth when Hebrews build ramshackle shacks on the public sidewalks?

BTW LeeBee. I went to your blog - now discontinued. Folks, a person to be admired. Honest and forthright.

Anthony must be getting a Washington job from his 'girlfriend.'

We would never say anything even remotely criticising the tweeded.

Weiner should speak out, and do something about the beach littering and animal sacrifice. But he's got higher aspirations, and this is pretty low on his list of concerns right now. He's trying to get tickets as close as possible to Obama during the inauguration, so that we can all see him on TV with "The One".

Where's British General Charles James Napier when you need him? He'd know how to take care of the littering problem.

Where's British General Charles James Napier when you need him? He'd know how to take care of the littering problem.
----------

he would give the natives a good 'dusting'.

"Darling of the leftie libs"?

Eh, Weiner's a rube, that much is true. But you my Crapper friend, are starting to sound like that whiney, right wing nut Mark Levin. lol

Damn, I was going for Bob Grant...

Ok ok...Morton Downey. But then you'd have to throw in "Pablum Puker"

One mans goat head is one mans sea shell.

Thanks George. I'm attempting to start blogging again. Any words of encouragement?

Is it really wise to post comments and a blog about your love life so openly online like this? Doesn't that put you at the risk of being a too open journalist?

not all goat sacrifices are done in voodoo. some of us in the Hindu religion, makes offerings to kal bairo ( a god). kali , kateri , etc. these offerings are done for several reasons. these Hindu gods need the blood to perform effectively . i often offer either a chicken,goat or a sheep. don't blame people for leaving the dead bodies on the beach because they have to .once the animal is beheaded, the body is to be thrown on the floor. after that, no one can interfere with it.