Will of the people to be trampled on Thursday 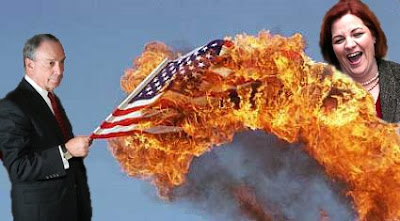 The City Council has scheduled a Thursday vote on a bill that would extend term limits to allow Mayor Michael R. Bloomberg and other city officials to seek a third term in office, nullifying the outcome of two public referendums, in 1993 and 1996, that imposed term limits.

The developments raised questions about whether the Council’s speaker, Christine C. Quinn, would go forward with a vote on Thursday, as she had originally planned. In scheduling the vote, Ms. Quinn may be signaling that she believes she has enough votes in the 51-member to approve the measure. Then again, both sides continued on Tuesday to frantically lobby undecided lawmakers like Councilman James Sanders Jr.

And the guy from Astoria who hasn't noticed all the rats running around and wants to be Borough President, is voting "yes".

But James Oddo of Staten Island is voting "no."

Not all the unions are buying it.

And there's a lawsuit in the works.
Posted by Queens Crapper at 3:03 PM

Vallone is such a wimp.

Great image. I think I might have to borrow that if you don't mind... heh heh heh!

By all means. Would be nice if it made the cover of the papers...

"In scheduling the vote, Ms. Quinn may be signaling that she believes she has enough votes in the 51-member to approve the measure."

Or, she's signaling that the Commissar's check payable to her account in the Cayman Islands has finally cleared.

The people of NYC will raise hell if the City Council overrides OUR VOTE. Be warned.

The economy is not valid reason for the council to change a law the people upheld twice. It is an excuse that Bloomberg and his pee-on council supporters are using to keep their jobs. Not long ago, Mayor Mike was chomping at the bit to throw his hat into a Hillary-Rudy presidential race. But that didn't work out, so he had to resort to his second choice- pulling a con job on the voters to get himself a third term. Remeber, folks, we're just Mayor Mike's second choice and backup plan.

And how stupid are people to believe he somehow has magic powers or the infinite wisdom to save New York for troubled economic times. He's not superman. He's a greedy businessman who doesn't give a damn what any of his constituents want, because he thinks he knows better. Times are going to tough no matter what. But the last guy I want in charge is someone who already cut essential community services -in good economic times- while actively encouraging development in those same areas. He wants upzoning all over the place, but says there's no money for infrastructure. Bad judgement, bad planning and bad prioritization are have been the hallmark of his management style throughout his second term. We need Bloomberg's skills like a hole in the head.

And since he's already turned his back on most of the city's communities in his second term, what do you think term # 3 will bring? Here's a forecast - more attempts to piss away your tax dollars on mega-developments that aren't needed or wanted. And of course, doing whatever the hell he wants, without seeking any community input whatsoever. And all while cutting police and firefighting resources. Yes, folks, ugly buildings, rich(er) developers, endangered communities and pissed-of people are already the Bloomberg Legacy he's tried to craft. Now he wants to another four years to expand on it.

And to build this legacy, basic American values are being shat upon by this shamless egomaniac, and the purest form of a hypocrite. Both the Willet's Point land theft and this discraceful power grab are prime examples. We can't afford another four years of being governed down upon by this modern day Napolean.

Those who believe in democracy need to contact their concil members immediately and let them know that they will NEVER get your vote again - for ANY office - if they support Bloomberg's theft of democracy. The issue of weather a third term is good or bad is irrelevant. The right to even eek a third term was taken away by the people. Using a loophole to take it back maybe barely legal, but is most totally immoral. Do not support any politician who says yes to Mayor Mike. It will make NYC the laughing stock of the country.

Rush to the trough, all of you city council hogs for your third pig-out
portion of political power!

His 70% popularity rating exists
only in Bloomberg's own deranged mind
(and is a concoction of his pollsters).

Most New Yorkers
want his ass out of city hall PDQ!

Funny how the Vallone sons split their opinions on term extensions.

At the last Broadway Flushing Homeowners Ass'n. meeting, candidate for C.M. Avella's seat Paul Vallone said that he was against a 3rd term without a referendum.

The Vallone family business is
politics.

They've got both sides of the term extension issue covered.

Whatever the outcome La famiglia di Vallone comes out ahead.

What a smart bunch of thieves!
Don Charlie (grandpa) "the judge"
sure knew how to run things and passed down his "wisdom".

All in the family unto this day!

Rich people believe that the laws don't apply to them. They are hell-bent on having things THEIR WAY. Mr. Bloomberg is one of those people. He'll leave when he is ready to. Damn the people. He doesn't even enforce half the laws of the city. He embraces all the illegals and provides them with health and welfare benefits and free education for their children. This is all done at taxpayer expense, yet the taxpayer has no say about term limits. Let's vote everyone out and start fresh. Elect the people that enforce and uphold the laws of New York City. Don't give the spoiled rich politicians their way. We want it our way!