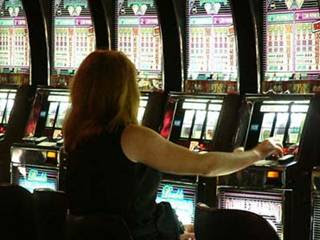 Silver says building a video slot center at the historic track on Long Island would compete with video slot machines already planned for nearby Aqueduct race track in Queens. Silver, a Democrat, says revenue to the state and racing would simply be split, not increased.

Paterson and the Senate's Republican majority proposed slots at Belmont on Sunday to raise revenue as the state faces multi-billion dollar deficits over the next three years.

But opposition from Silver, who spoke Monday at an event in Rochester, would block the plan.
Posted by Queens Crapper at 12:46 AM

Silver is all about being the cog in the wheel of progress. Not that video gaming is progress - quite the contrary but that is what the State is forcing upon Queens.

If the Big A get video gaming then let Belmont absorb some of the cars in Nassau - who needs more traffic in Queens?

Silver is such a jackass.

He opposes slot machines at Belmont becauses it causes competition...!!!

Am I missing something?

Competition is the most fundemental element behind a prosperous and capitalist society.

Without healthy competition the quality of products and services would fall to total crap.

Thank you Mr. Silver. Now please stop them at Aqueduct too.

Let's understand this... slots bring in more customers than a racetrack. Slots are more profitable than a racetrack. If the Big A is closed for racing bit open for slots, it will still do a lot of business. If Belmont has no slots.... it will die. Belmont is a very attractive property. The Big A is not. Why set this up so Belmont will close? Give them the slots already.