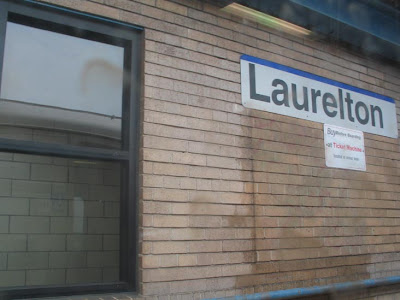 It seems that not a day goes by where someone has not become a victim of automobile vandalism whether parked inside the lot or on the adjoining streets near the station. It is common to see broken auto glass scattered all over.

This past Thursday (16, October 2008) my daughter's car, as well as the lady parked behind her, had their rear passenger side windows smashed in. They were parked on Prospect Place, the street on the Eastbound side immediately adjoining the station. My daughter had her navigation system stolen. The lady behind her had nothing stolen. Besides feeling violated due to property vandalism, two women on a dark side street with busted windows incites warranted fear.

As I stated, this is not uncommon. In another incident in July of 2007, my daughter's then brand new car was seriously side swiped while parked on the street immediately adjacent to the parking lot on the Westbound side of the station. Needless to say, no one left a note with their information. There is a GREAT NEED for cameras, civilian patrol and/or NYPD patrol of this area. After my daughter and the lady called 911, it took over ONE HOUR AND FIFTEEN MINUTES for police to respond.

This is ridiculous and potentially unsafe for two women alone on a deserted street at 8 oclock at night. Please institute patrols and surveillance immediately." - anonymous

Photo from Bridge and Tunnel Club
Posted by Queens Crapper at 12:23 AM

Oh noes! A whole hour and 15 minutes?! There was no need for an immediate response because the crime had already happened. Nothing about the crime changed in that waiting time. Zip it.

You want a citizens patrol? Start one yourself. Quit bitching and do something.

Except that the suspect got further away.

MTA to citizen:
We'll look into it.

NYPD to citizen:
We have more important things to worry about.

City Council to citizen:
Your car was parked on city property and will be seized through eminent domain.

Mayor to citizen:
In four more years I'll have all the kinks worked out.