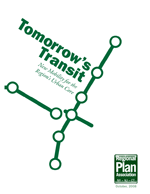 “Sixty−five percent of the borough’s population lives beyond walking distance of a subway stop, mostly in eastern Queens,” according to the report.

The report goes on to say: “Some areas of Queens have neither express buses nor subways, including College Point east of La Guardia Airport and the southern portions of Queens Village and Rosedale.”

The RPA proposes converting the LIRR’s Atlantic Branch to transit use.

“This line originally functioned as a transit line and could again, if extended into Manhattan and connected to the Second Avenue subway,” read the report. “This would shave off at least 20 minutes from Jamaica to Lower Manhattan.

“The Metropolitan Transportation Authority has estimated this line would carry 100,000 riders a day if the Atlantic Branch were linked to the Second Avenue subway,” the report read.

Transit report points out shortcomings in Queens
Posted by Queens Crapper at 12:12 AM

There have been so many proposals over the years regarding activating this right of way..just do it!
Until the NIMBY , environmental people, and business owners underneath it cry foul!

Look. There is no money for transit projects. The costs of building them have risen so much it makes them impossible. Even when the city was swimming in real estate dough a few years ago, the 2nd Avenue subway *barely* got started, and nothing has happened yet with the #7 extension to Javits -- except the cancellation of a stop at 10th Avenue.

Old rail lines are never reactivated in New York. The only recent case is the old west side freight line, which is being converted to a High Line park for the richies -- when CSX sold the city the structure, one of the stipulations was that it *couldn't* be used for transit. It would have made dandy infrastructure for a #7 extension.

--Even if there were any money, there's the NIMBY factor to deal with. NIMBYs have in large part stopped any extension of the Astoria Line (N, W) to LaGuardia, and the conversion of the LIRR Montauk Branch in Glendale, Ridgewood and Maspeth to subways. Gotta keep out the riffraff, you understand.

So sure, plan and plot away. But know that none of these lines will ever see the daylight.

The best solution is to convert some of our wider avenues to dedicated express bus lanes.

Where the heck is the LIRR Atlantic Branch? There are a lot of defunct or underused LIRR lines in NYC -- the Bushwick, the Evergreen, the Bay Ridge, the Cedarhurst Cutoff, the Central RR of Long Island, the Whitestone ... but I've never heard of the Atlantic...

Maybe you should ask Phillip when you go to work on Tuesday...

Bear in mind that the upper level of the Archer Avenue line, which is used by the E line, was originally supposed to run along the Far Rockaway line to Springfield Boulevard, either by using those tracks, or by building a new line. The upper level tunnel runs under York College to South Road.

I think its a great idea and if we push hard enough (really hard) it will happen but the previus commentor was correct in one specific observation, although money is an issue it can be overcome. NIMBY's on the other hand - thats a big problem but not to sound pretentious, I dont think that residents of Bushwick and the like would have a problem with more rapid transit.
As a side note, a converted LIRR to subway stop in Glendale and Ridgewood/Maspeth would have been the best isea yet. It would have driven up property values (thus keeping out the rif raf) and stopped the ever present slide of the three neighborhoods - not to mention it would shave off precious time off of my commute and so many of my neighbors.

Great idea, if only there was money for it. Ah, but where would we get such money? Wait, did you guess it too? No, sorry, congestion pricing is the wrong answer. No, I'm sure this blog is advocating for something else, like the Magical Money Fairy or something like that. Congestion pricing... makes too much sense. Queens Crap would never go for that.

How would congestion pricing pay for this? It's supposed to get cars off the road by making it too expensive for people to drive. No cars = no fees = no money for these projects. Remember, if it worked like people thought it would, they wouldn't have had to greatly raise the fares and expand the congestion zone in London...

Maybe we should just downzone the whole borough so that there isn't so much congestion everywhere. Oh wait, the real estate industry and lobbyists would never go for that. We all know government is not for the people and by the people anymore.

Ah, congestion pricing. How exactly would that work now that people don't have jobs anymore and the economy is in the toilet?

"As a side note, a converted LIRR to subway stop in Glendale and Ridgewood/Maspeth would have been the best idea yet. It would have driven up property values (thus keeping out the rif raf) and stopped the ever present slide of the three neighborhoods."

You think this is how it works, eh? You build a subway, the derelicts come with it. Then you get upzoning and towers. Home values have only gone up over the years. What's caused a quality of life "slide" is multifamily housing and rampant absentee landlordism, not the lack of mass transit options.

The point is Glendale and Ridgewood have already passed the point of no return. They will never be the nieghborhoods they were even twenty years ago.
I walk out my door and I find illiegal immigrants going through my trash (everyday, all day) former Bushwick residents selling & using drugs on my corner and children no older then 11 playing outside until 10 or 11 PM on weeknight (where are the parents?) The neighborhood is gone - the rif raf are here.
Better to build the subway, let the old loyal neighbors who want to leave cash out with dignity and let the hipstrers move in rather then it continue on its slide to becoming the new Bushwick.

Check out who is on the board of directors of the RPA then ask what more self serving studies they can come up with.
hint, MTA chairman and Con Edison on their board.

a bunch of thieves at RPA