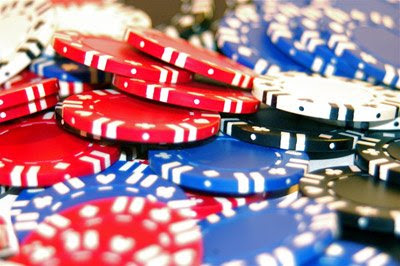 Aqueduct Raceway casino deal is too much of a gamble for New York
Monday, October 20th 2008, 4:00 AM

New Yorkers have heard a lot of nice-sounding talk out of Albany about transforming down-at-the-heels Aqueduct Raceway into a glitzy resort.

In return for accepting 4,500 video slot machines at the Queens site, the pitch went, the city also would gain a hotel, concert venue, retail shops or other attractions on a grossly underutilized piece of real estate.

But the deal galloping toward the finish line in Albany looks too lopsided for comfort, heavy on Vegas-style gambling, with all its attendant problems, and light on everything else.

The proposal preferred by Gov. Paterson and Assembly Speaker Sheldon Silver, from a firm called Delaware North, guarantees construction of only one thing: a racino full of one-armed bandits hooked into the state lottery, similar to those operating at Yonkers and other tracks.

It's also offering $370 million upfront to the state - $120 million more than the next highest bidder.

But as for the hotel and other goodies, they'd be postponed to a phase two. Exactly what would be built and when is left iffy, dependent on how much money the slots brought in.

And there are grounds for doubt about Delaware North's commitment to further development, given that it only recently recruited a real estate partner and didn't release sketches until last weekend - after getting the nod from Paterson and Silver.

The other bidders have fleshed out their visions for Aqueduct a bit more thoroughly. But how their proposals line up against Delaware North's remains a secret, known only to Capitol insiders operating in typical secrecy.

It may turn out Delaware North - a New York-based company that successfully operates three other racinos - is the best bet for Aqueduct. That $370 million certainly would help plug holes in the state budget.

But given the high stakes for Ozone Park and the rest of the city to have a subway-accessible casino, it was reasonable for Senate Majority Leader Dean Skelos to demand more details before giving his okay. This gamble with the future of a city neighborhood needs a full public airing before anyone signs on the dotted line.
Posted by Queens Crapper at 12:14 AM

This is a give-a-way by Patterson and Shelly. We should put racino in the lower Manhattan district of Shelly - see what he says then.

How about revitalizing the track by having a limited season (spring) modeled on Saratoga Springs track. Ensure free access and pleasant picnic grounds for residents etc - do something well by the neighborhood. Racino - this is poison!

This deal does not pass the smell test. Paterson and Silver are trying to lay off part of the budget mess on the backs of Ozone Park. Skelos is just playing to oppose long enough to give Maltese some time to play good guy. By Nov 5 Skelos will join Paterson and Silver or Malcolm Smith will. Delaware North has no plan, just an in with dysfunctional pols in Albany and elsewhere.

This smells of a bad deal for the Community of Queens. I have lived and raised my children in this community for 30 years. I have watched Gov.Cumo sell us out to Home Depo and sell a portion of Aquaduct Racetrack to the Port authority to plug a State budget shortfall.Gov. Patterson and Speaker Silver are using this deal to plug yet another State budget shortfall.
Our Community was sold a balanced proposal, one where everyone won. The State would get an up front payment and the Community an upscale destination that would draw tourist from JKF, provide jobs, funding for education and ecomonic growth for the Queens Community.. Delaware North's proposal will leave Aquaduct as it is and build" a box with one arm bandits ".It will lead to crime and gambling addictions due to the crowds this will attract. The ultimate failure of this deal will allow the State to leave us with yet another bailout in a few years when this deal fails to make a profit.
We just bailed out Wall Street, we bailed out NYRA to the tune of millions , when will this stop. The taxpayers will not allow this to happen again. We have had enough , there are 2 other choices that have proposals the we see more value in and those proposals serve both sides ...the Community and its needs and the State, not just those of Speaker Silver and Gov.Patterson.
We want a public inquiry that allows the commuinty equal say in who should be allowed to operate a Casino in our community.I urge Sen. Maltese and Assembly Woman Pheffer to stand up for the community that elected them. We remember they did not do so to the Cumo administration it is time they defend us.

Governor Patterson , Speaker Silver wake up..we the community are not happy with this decision and you know why.You chose to give this deal to an entity that is paying the state the most upfront but has no concrete plans for developing Aquaduct.It will remain a dump that they throw a few coats of paint on .This is not the agreement we were sold by the State.
We demand that Delaware North be withdrawn and that the community have a say in this...
Sorry but your budget shortfall cannot come before Ozone park residents..we want you come out and speak to the Community and find out how we feel about this decision.
Adelene

Where are the NY Horsemen – your livelihood is also, at stake.

Never forget Delaware North, walked out on Empire Racing (us horsemen), Dennis Brida representing NY Breeders and countless others, just over 2 years ago this month.

They promised they would look after us, after we had invited them in to bid for the NYRA franchise, but when they saw Empire had run out of funds bidding for the franchise,
they suddenly formed their own bidding group for the Aqueduct project.
Like hell they have. They have only promised large monies up front
to satisfy potentially short term pollies bottom line, whose names we won't remember, when another winter bites unforgiving into our backstretch, doing little to
all of the grassroot racing folk.

Marylou and her husband are helping, but we need every
abled body community member out fighting against Governor Paterson's decision to aware
the Aqueduct and maybe Belmont, to racing parasites.

Long term, consistant drip fed
monies are obviously essential
to any blind 'son, for our communities to survive in these real tough times..

Keep NYRA honest, placing DelNorth near a proven incompetent racing model no-matter, where the chairs are placed, detracts from everything NY State, various affected community and NY racing groups have been trying to achieve in past few years.

Make a Community Stand & Vote against Paterson & his legalised co-hoots.

I am disappointed - like many others here. I am no finance expert but I do live and work in the community and believe other operators would do more for us. I have met Capital Play at some events, and in talking to neighbors we have been impressed with their involvement and interest in doing what's best so far. The other group too, but Delaware N. seems to be the least interested in us. I realize business is business and we are just regular people in their minds, but this really is frustrating - our community is being used, not supported with this deal. Shame on the Governor, shame on the Senate for not listening to US!

Is there anything we can do to get more discussion or input from the community surrounding this decision or are we SOL?