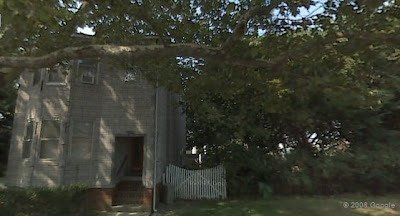 This old house is located at 66-26 Gray Street in Middle Village. It was owned by the Tetmeyers, who are said to have farmed the land for generations. Then it just became a 1-family house with a big yard. Last year it was sold to a development company by the heirs of the last Tetmeyer of Middle Village. As it is on a rather large lot, developers were chomping at the bit to get their hands on it. A QC tipster writes:

I've heard they plan to rip the house that barely stands there down to put up, yet another set of 4 (perhaps 5) 2-family "homes". They put down rat poison, numerous basement windows are gone, the doors are not locked and the roof was ripped off. There is a distinct smell of mold coming from the house as you walk by. Not to mention the "hidden" tractor being stored in the bushes on the side of the house. Why is no one doing something about this? I KNOW Como's office has been contacted. As I would have suspected from him... he's done nothing. Probably busy building on his mansion. But, that's another tirade. Apparently, 311 can only take one complaint per household. So, that leaves us where? When will something be done with the house sure to fall?? It's a mess and no one seems to feel the need to do anything about it.

The interesting thing about it is that there is supposedly a small graveyard in the section just north of the house amidst that green. Several of the neighbors have seen the headstones which they say mysteriously disappeared just before the property was sold...

So far, there's a violation for failure to maintain and another for unsafe building.

There's also a demo permit on file, although request for mechanical demo has been denied.

Goodbye, green space. Hello, crappy houses. Ironically, this is in the part of Middle Village that has already been downzoned. 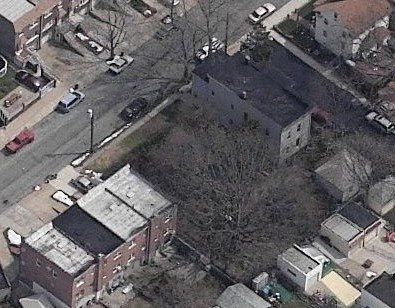 As much as anyone I don't want to see this home removed, that beautiful tree toppled, and certainly it's history relevant to MV destroyed... but your title of "Downzoning fails to stop overdevelopment" really doesn't make sense to me.
There's one house on land that is zoned multi-family. Even the homes around it look multi-family.
Downzoning isn't landmarking.

If anything, downzoning fails to stop the construction of more CRAP.

Crap = overdevelopment and we have been told that downzoning is supposed to curtail that. The fact that the community floods, the schools are overcrowded, power outages are common is proof that the area is already oversaturated with housing and can't handle 8-10units where there used to be 1.

"If anything, downzoning fails to stop the construction of more CRAP."

What just MIGHT do the trick is to dump the lard. Demonstrate that, since he has himself broken every rule to build his own fathouse, he certainly has no authority to prevent someone else from doing the same. As a matter of fact, he has demonstrated that he doesn't give a damn. He got his.

Now, DUMP the El Gordo Lardo. Why continue to pay for this failure?

I had a friend Kathy Denig lived on 71st off Metro in an perhaps 1800's farmhouse.
In my last trip through the old Neighborhood I found the house gone. Replaced with nasty ugly boxes.

It had been like 20 years and was like driving through a nightmare !!
Neiderstiens was a friggan Arbys !!
Shame this is happening.

I would think with all the Italians with "buck$" in MV they could all pool some $$ to buy this last property and use it for a community clubhouse.

The new owner is clearly pulling the "rotten timbres and rats trick" like they do on Long Island breaking the roof and basement windows.
(Sometimes they actually release and plant trapped rats and coons)
This way he can get a stealthy "emergency demo" permit to plow it down down.
Have no doubt some diesel fuel for that bulldozer is hidden there, some shame if it ends up in somebody’s heating oil tank.

What is the point of this post? Obviously downzoning does not ban development, it just forces the developer to build closer to the existing scale.

The existing scale on this street is attached multifamily rowhouses, so obviously the site can be developed with the same.

Why isn't there a special zone for homes that are on oversized lots? Oh, wait, there is, but it's only used in eastern Queens.

Sounds like you're an asshole who thinks illegal demolition is a-ok!

"The existing scale on this street is attached multifamily rowhouses, so obviously the site can be developed with the same."

Do you even know the block? There are 34 houses on Gray Street. They are mostly 1 and 2 family homes. 6 are attached on both sides. The rest are either semi attached or detached.

Sorry, anonymous, you are lying. Unless the pic is wrong, the street is filled with rowhouses. And what are you talking about "illegal demolition"? You don't see the pic, and now you can't read the text? Find your glasses, or visit an optometrist!

The photo doesn't show the entire street. Go to Windows Live Local and you will see what's there now. As for illegal demo, its been going on for months, well before the permit was filed for.

You obviously aren't from the area. Educate yourself.