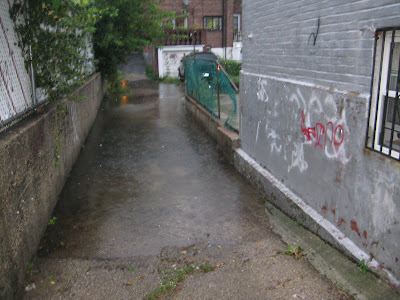 "The neighbors have had to put up with this same flooding problem for well over 30 yrs.... and no one does anything about it. A few people have even sold their house and moved because they got sick & tired of bailing their basements every time it rains. The problem is the driveway alongside the house at 31-09 76th Street in Jackson Heights, Queens. When it rains, the driveway floods so severely that the water is often 6 to 12 inches deep at the center. In a heavy rain, the water extends from the 76th Street side of the community driveway entrance to the 77th Street side and then up the center community driveway for several houses. It has earned the local nickname "Lake Ivan" -- named after Ivan Torres, the man who used to live next door but moved several years ago because he got tired of sandbagging his backyard to protect his basement from his neighbor's negligent driveway flooding. The Pakistani guy who is the owner of 31-09 76th Street does not give a damn about that house, the flood, or the graffiti either. He converted it illegally to a 3 family house, against a Full Stop Work Order, and all he cares about is collecting his rent money. He does not live there, so he doesn't care about the flooding. I wonder what his basement tentants think? Hmmm. The deep water is an attraction to the children who live on these two streets and you can find them playing in it after the rain stops. Dangerous! It's been reported over and over and over again, but all the City agencies seem to find absolutely nothing wrong. That baffles me. So, when will someone force this guy to fix the problem..... before or after a child drowns there??? Mark my words, because this story will end up on TV News, one way or the other. I am hoping it is a story to shine a light on the problem and get it fixed..... I really don't want to see another story about a tragedy that could've been prevented if someone would just listen!!!!!!" - anonymous
Posted by Queens Crapper at 12:00 AM

Now there's a job for the Commissar.

He can apply eminent domain to seize the property of the illegal housing and convert it to a city shelter.

Oh! Wait. The illegal tenants are themselves probably illegal aliens, invited to live here by the Commissar himself - mainly to be the nannies, and servants for his rich developer friends.

So, expect no action. The Commissar is reaping rewards from this situation.

If it's private proeprty get the neighbors together and fix it. then sue those who don't contribute. Simple.

If this alley leads to a community driveway, then all the homeowners in the row are responsible for fixing whatever the problem is. Time to take up a collection and get new drains installed. If this has been going on for 30 years, then you all are to blame.

A gallon of gas and a match can fix almost anything.

Why do you people put up with such BS? Grow some balls and handle it yourself!

Glad to see that most of the socialists who post here belive in a little self help every now and then. god bless you all.