There is an anonymous e-mail going around from a supposed teacher (although we all know it's really from grandmother-groper Dennis Gallagher, advisor for the Como campaign) stating that Council District 30 special election candidate Elizabeth Crowley is fraudulently representing herself as having been endorsed by the UFT on her campaign literature.

According to UFT's website, Elizabeth was endorsed by the organization at a meeting earlier this year: 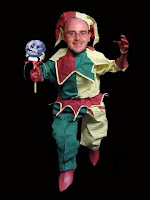 Nice try, Pinky and Anthony. So much for bringing integrity back to the council...

God help Council District 30!
Posted by Queens Crapper at 12:27 AM

Speaking of "attack dog", our "heroes" strike again...at our pocketbooks.

(although we all know it's really from grandmother-groper Dennis Gallagher, advisor for the Como campaign)

Just how do we all know this?

This was comfirmed by one of Como's staff.

HA HA HA!!! Liz should just send out her own anonymous attack flier with the words "Gallagher is working for Como." She'd win in a landslide.

Anthony Como: endorsed by Serf Maltese, Phil Ragusa, and Dennis Gallagher! That would make for some great campaign literature.

How do we KNOW it's Gallagher? Anonymous attack mail is Gallagher's trademark. He did it back when he was running against Liz in 2001, he does it against civic associations and this certainly is also his doing.

Is it a good thing that there may not be one Republican councilman or Republican voice in the New York City Council in 2010?

That bald headed pervert should have been thrown in jail!

Instead he resurfaces as an "ADVISOR"? !!!

He's certainly got enough experience in that area having done that for almost 2 full terms in office.

And in orifice too...the granny raper!

Gallagher and Como would have us believe that the UFT would endorse a candidate in June but suddenly switch sides in November. Especially since Liz only lost by a handful of votes in June. The UFT is basically an arm of the Democratic Party. I don't think they have ever endorsed a Republican council member. Why would they endorse a minority party candidate anyway?

What Gallagher isn't saying in his attack e-mail is that the palmcard he is referring to was for the June election anyway. You can tell by the "Schools First" logo which is the line Liz ran on because in that special election, traditional party affiliations were not allowed to be on the ballot next to the candidate's name.

Hey Crapper, you're being kind to Gallagher when you describe him as a "grandmother-groper. "

In reality he's a grandmother raper.

I know people may say that he plea bargained down to "forcibly touching." The evidence showed that the woman was beaten and penetrated. Gallagher originally said that sex was consensual then pled guilty to forcing himself on her.

Yeah right, Gallagher is as innocent and OJ is still looking for the murderers.

For Como to be using Gallagher as his campaign advisor and a staff made up of former Gallagher hatchet men and women shows how Como just doesn't get it.

Does anyone actually have any proof at all that Dennis is helping out the Como campaign?

a Crowley running for office?
why not just have someone pass the postion on to them, like her smarmy do nothing for the people of Queens.
did with Manton.

This statement was made on May 22-"The delegates endorsed Assembly Speaker Sheldon Silver (64th AD-Manhattan) for re-election and Elizabeth Crowley (30th CD-Queens) for a special election to the City Council."

I called the UFT PAC and they stated that will not be endorsing anyone for the General Election.

Please get the facts straight

"How do we KNOW it's Gallagher? Anonymous attack mail is Gallagher's trademark. He did it back when he was running against Liz in 2001, he does it against civic associations and this certainly is also his doing."

So you have a well-reasoned allegations - OK - but "We all" don;t "know" anything - you suspect. See the difference?

The facts don't lie, only Holden and the Crap do

Yeah, I really believe you called the UFT. Why don't you get something in writing from them, scan it, and post it on your hate blog?

And you posted a copy of Liz's old campaign literature from the previous campaign where she definitely WAS endorsed by them, as another commenter stated.

In addition, the third comment, made by me, clearly stated that a source within the Como campaign confirmed that Gallagher is working for Como. THAT is how we all know. The letter having his fingerprints all over maybe wasn't enough for you, but his campaign confirmed it. Now go back to the gang and find out who spilled the beans.

Before you accuse someone of fraud, better get all the facts.

I don't understand what the problem is. Crowley was endorsed by the UFT and put that on her campaign literature. That palmcard reflects the endorsement.

"Yeah, I really believe you called the UFT...In addition, the third comment, made by me, clearly stated that a source within the Como campaign confirmed that Gallagher is working for Como. THAT is how we all know. "

Hey Wilkinson/Holden we all believe that you acually have a "source" within the COMO campaign ... NOT.

You only wish it was bullshit. You should be more careful with who you trust, Pinky.

Kind of reminds me of when Pinky sent out attack pieces on himself and then pointed the finger at Crowley. He claimed he was gay and then dragged his family along going house to house to cry to the voters how unfair this was and show them what a family man he was. What a freakin' joke that turned out to be!

The knee-jerk little fucker had to update his hate blog to say you are in a time warp, Crappy. Look who's talking! - showing Liz's old campaign lit and stating that she wasn't endorsed, when she certainly was.

Twisting the truth: just another tactic by the pink man.

isnt Crowley friends with a Mr. Brian McLaughlin. hiding in his back room office in 2001

"Give Ms. Crowley a chance to prove herself."

She has proven herself to be someone who has a problems with campaign finances.

"Show me your friends and I'll tell you who you are."

Thanks for continuing to be a gutless coward Crapper. Why don't you stop removing comments that are critical of the leadership of the Juniper Park Civic?

I also had that letter mailed to my house. Instantly, I knew the source: Forcible Toucher (Rapist, some say, particularly the victim).

This is his cowardly, sissy-boy style. Rape and run!

Never forget the origins of Forcible Toucher: Maltese hired him as the office gofer, before he hired Como as the gofer.

Forcible Toucher and Como are neighbors and drinking/gambling/womanizing buddies. When did Como or Maltese ever publicly condemn the Forcible Toucher?

Goodby, Como and Maltese. Please take the Forcible Toucher with you as you go. No need to welcome Elizabeth Crowley or Joe Addabbo, they don't need anything from you.

Dennis Galllagher is a political god. He is a myth, a legend and strategical genious. Even after all that has happened, he is running Crowley's and Como campaign. He is writing anonymous letters and sending them to voters. He is still the focus of Holden's psychosis. Gallagher is the Karl Rove of Middle Village.

No guy your wrong - most people continue to talk about Gallagher because he was the last big political problem in Middle Village. When a new problem comes up they will forget about him, as most already have .

Out of the closet, brave Forcible Toucher. Take Como with you.

Here's your hat; there's the door; no need to call; even your doormat says: UNWELCOME!

On the night of November 4th, the three losers can toast each other all night after all three of you are tossed out. Maltese, Como and the brave, Forcible Toucher. Then, you can form the Pornographic Party! Motto: We read, we rape, we lie and steal!

Most people continue to talk about Gallagher because he got away with a heinous crime only because he is an elected official and probably has dirt on the DA and his pals.

Can't you think of anything else to do for the goodness of the neighborhood other than beating a dead horse. You must lead very interesting and event filled lives if you are still driving stakes into gallagher's heart.

When Gallagher stops, so will we.

She didn't run in 2005, asshole! You ran unopposed after Serf made a deal to protect your sorry ass!!!