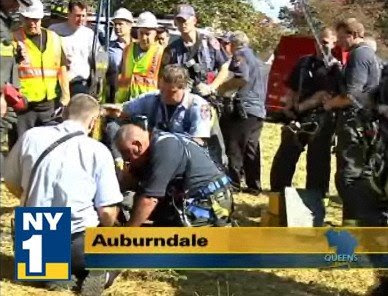 Three teens were charged with criminal trespassing after firefighters rescued them from inside a Queens sewer Wednesday.

The boys, aged 15, 16 and 17, were trapped underneath the sewer at Fresh Meadow Lane and Underhill Avenue in Auburndale.

A neighbor said she called police after she saw them climb into the manhole.

Officials warned that things could have been worse if not for the good weather.

That's right, haven't they heard about the alligators down there?
Posted by Queens Crapper at 6:42 AM

There are likely to be plenty of stinkingly corrupt clubhouse pols hiding out down there!

Whew...get a whiff of Toby S.
They just fished her out!

I know this location- the 12-foot wide sewer is part of the buried section of Kissena Creek.

When I saw the headline "Kids trapped while exploring sewer", I believed the story was going to be about kids in a public school.

Kids being kids, doing stuff most of us old timers did at some point growing up and never got hurt or in trouble for.

Cops being Cops, making arrests to meet their quota.

If that buried creek (which runs the length of the Kissena Corridor)
were suddenly filled with a storm surge those kids would be gone!

Their lives were saved because of alert concerned citizens.

Now....what if terrorists dropped in to plant something down there?

Didn't think of that one!