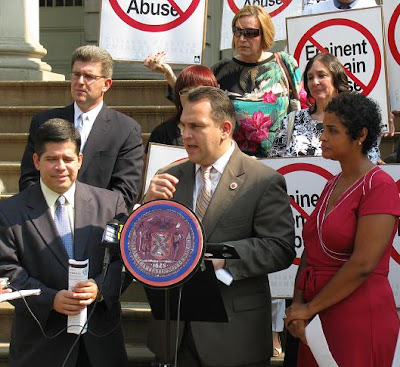 City Hall, NY – Council Member Hiram Monserrate today announced the introduction of legislation in the City Council to require responsible use of eminent domain in cases of economic development. The legislative package introduced at today's Stated Meeting of the City Council will call on the city and the state to address the growing use of the power of condemnation to create private wealth, rather than public benefit.

"On a federal level, we have lost sight of the due process of law concerning eminent domain," said Monserrate. "This legislative vacuum has left small business owners in Willets Point and homeowners in Atlantic Yards, among many, to fend off condemnation efforts that benefit large developers with deep pockets. Today, projects are underway in every part of the city that send the message to all residents and homeowners that your life's work can be stolen out from under you simply to enrich others. This legislative package challenges the city and state to step up to the plate and ensure residents a fair and open process that preserves the real intentions behind the 'public good.'"

Monserrate stood with business owners and workers from Willets Point, which is located within his Council district in Queens, who described their experiences with the potential loss of their property and livelihoods in the city's efforts to take their private property and give it to large, private developers. The project is one of many across the city that has or will face the threat of eminent domain in the name of economic development, including Atlantic Yards, Hudson Yards and the Bronx Terminal Market projects. Residents as well as property owners have joined community-wide protest efforts to prevent these development projects, including court challenges and public protest rallies. Monserrate noted that these citizen revolts are often overwhelmed in the face of the large legal staff and financial resources of the real estate developers working with the city to solidify lucrative contracts.

Monserrate's comprehensive regulatory package, including an introduction and 7 resolutions, will curtail and prevent abuse of the eminent domain law by providing the public and communities with mechanisms of democratic control and oversight. The proposed local law requires financial impact reports from local development corporations for real property acquired by the city through eminent domain, including an analysis of the estimated costs and benefits of the proposed project, the estimated amount of retained or additional tax revenue to be derived from the project for the next 3 years, the amount of assistance received by the local development corporation in the form of a loan, grant or tax benefit since the beginning of the project period, and the present value of the future assistance estimated to be given for the duration of the project period. The resolutions support state efforts to create comprehensive reforms, including providing local control, and requiring increased compensation economic development plans and homeowner impact statements.

The power of eminent domain authorizes the government to appropriate private property for the public good without having to obtain the consent of the owner. Eminent domain has long been recognized as an essential tool for governments seeking to acquire real property for the completion of public projects such as the building of roads, bridges, public utilities and other necessary public works. However, on June 23rd, 2005, in a 5 to 4 ruling, the U.S. Supreme Court approved the Connecticut city of New London`s plan to take 90 acres of private land for a redevelopment program. This new Supreme Court ruling potentially allows local governments to claim property for the benefit for private entities, rather than restricting eminent domain to acquiring land for public use. Moreover, this process can proceed with minimal public input and review and without the traditional evidence that the area to be condemned is blighted.

Monserrate quoted Retired Justice Sandra Day O`Connor's dissenting opinion in the Kelo case, stating that the Court`s ruling favors the most powerful and influential in society, leaving small property owners with little to no recourse. Justice O`Connor wrote that the "specter of condemnation hangs over all property. Nothing is to prevent the State from replacing any Motel 6 with a Ritz-Carlton, any home with a shopping mall, or any farm with a factory."

Monserrate was joined by Council Members Diane Reyna and Vincent Gentile from Brooklyn and the Willets Point Industry and Realty Association.

More from Crain's NY
Posted by Queens Crapper at 6:54 PM

Thanks for taking the lead on following the Willet's Point plan.

I've written about it on my own blog and given Queens Crap a plug.

Justice O'Connor
was absolutely correct about
the abuse of government power
over the weak!

As we sleep, a sword hangs by a thread over every home owner's head.

If "they" can get away with stealing Willets Point, it sets an extremely dangerous precedent .

"They" can someday take your own home, or the homes of your children or grand children!

Think about that before you
rush ahead to condemn the
intentions of the WP junk yard owners to hold onto their private property.

As the original Nazis used to boast, "Today Germany, tomorrow the world"!

Our Neo Nazi pols, aided by
SS leader Shulman is out to
grab your land.

That's what Frau Shulman meant by her vicious screaming,
"This plan will never die".

Where was Monserrate on Hudson Yards, Atlantic Yards, Williamsburg, West Harlem and all the other maga-zonings (many of which used Eminent Domain). Monserrate was right there supporting it. He's a hypocrite as are all the other council members on that letter. Why should anyone now care about what Monserrate has to say when their neighborhoods are already being bulldozed partially thanks to him.

Stop trying to shift the subject in a feeble attempt to divert the issue from Willets Point (Evan is it?).

This attempted land theft is occurring right in our own back
(better make that) front yard,
under our noses!

And that corrupt old bag Shulman deserves to be put to the curb on the next recycling day!

She was Manes' stooge and this is still Manes' old plan in the works.

His legacy of crooked politics lives on. Will we ever be rid of him?