Manufacturers rezoned out of existence 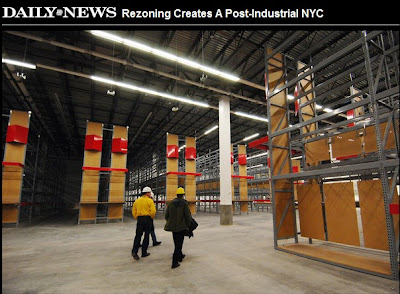 When Mayor Bloomberg took office in 2002, there were 12,542 acres in the city where manufacturers could set up shop.

If the latest round of proposed zoning changes goes through, the Bloomberg administration will have rezoned 20% of that factory-friendly land, according to a study by the Pratt Center for Community Development obtained exclusively by the Daily News.

"But it's worked out to be almost entirely residential development," he said. "There's a real concern it's gone too far."

Greenpoint-Williamsburg Plan, May 2005: "The 184-block rezoning wiped out 1 million square feet of manufacturing-only zones, and turned an industrial area with a 35-block shoreline perimeter to residential zoning for luxury towers. Inland, light industrial zones were drawn — the city’s attempt to help small business — but rents as much as tripled. Industrial job loss was estimated at 4,000 by a Rutgers University study. Promised public green space has yet to materialize."

And here's the Queens map.
Posted by Queens Crapper at 12:12 AM

And the real estate blog cheerleaders have done how much real reporting on this? Oh, wait, their real estate is only residential, or the "quaint" "ruins" of "post-industrial" NYC. (See all the jackoffs crying over the ghosts of Domino Sugar, almost none of whom paid more than five seconds attention to the labor struggles-- and tragedies-- of its final years.)

As for the working industries of NYC still extant, it seems they hardly count either, which is not a surprise: it's what people who paid ANY attention said the whole goddamn time.

Maybe if Q.C. Sheet Metal & Fabrication or Q.C. Steel or Q.C. Style (a knitting mill) offered "yummy brunch" along with a factory tour on weekends more people would pay attention?

Former City Councilwoman Julia Harrison "suggested"the formation of a not for profit group "The Coalition For a Planned Flushing", at whose behest the Department of City Planning rezoned College Point Blv'd. from light manufacturing to commercial/residential.

I guess they never knew she might just being using them.

Shades of her "Network For Intergroup Harmony".

Did this not benefit her friend/contributor Joshua Muss
directly?

H-m-m-m, and Julia is running for district leader ?

Funny how everyone focuses in on the manufacturing (like Dutch Kills)

A great cover to avoid discussing the real issue.

How communities of RESIDENTS are being destroyed by development.

Maybe Hunter or Pratt, instead of doing developer studies could look into that.

Maybe the preservation community, secure behind the ramparts of their designation, could look into that.