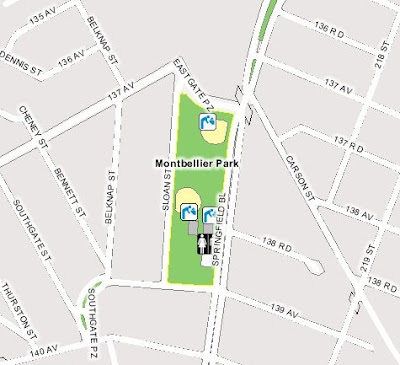 On August 21, members of the Montbellier family joined Assistant Commissioner Ed Lewis, Community Board 12 District Manager Yvonne Reddick, and local little leagues and soccer organizations to 'kick off' the opening of new turf fields at Montbellier Park in Queens.

Thanks to $2.6 million in funding from Mayor Michael Bloomberg and Council Member Sanders, Montbellier Park now features all-weather turf fields for soccer and baseball along with drinking fountains, new trees and a chain-link fence.

This park honors Albert Montbellier (1899-1963). Born in Manhattan, Montbellier was a dedicated civic worker devoted to his Queens neighborhood for more than 35 years. He was a leader in the fight against air pollution and aviation noise and served on the Borough President's Committee on Aviation Problems.

Fight against pollution, eh? Well then I'm sure he'd be all for carcinogenic turf fields being placed in a park with his name on it.
Posted by Queens Crapper at 12:20 AM

Parks Department continuing to burn the wick at both ends. They are the cancer of this city.