Mayor and Council may pull a fast one 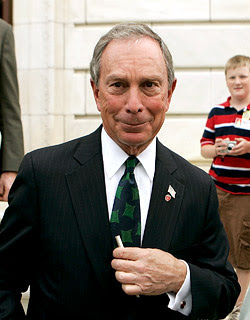 Mayor Bloomberg is considering extending term limits through a deal with the City Council that would allow him another four years, while also boosting lawmakers' time in office, sources told The Post.

Bloomberg has publicly said he intends to leave when his term ends on Dec. 31, 2009, but has privately expressed interest in undoing the city's cap of two four-year terms with a legislative change, not a public referendum, sources said.

Bloomberg has recently indicated he believes he has plenty of time next year to work out an arrangement with the council, sources said.

"It's more 'yes' than 'no' right now," a source said. "They think they have time to wait until after the [November] election."

Extending term limits through legislation could be controversial, because some believe they can be changed only through a public referendum.

The Post first reported in April that Bloomberg was contemplating a move on term limits.

"As the mayor has said again and again, and as recently as yesterday, he expects to serve out his second term, and then turn the office over to someone else," Bloomberg spokesman Stu Loeser said.

Quinn "has never spoken to the mayor or anyone in this administration about this," said her spokesman, Jamie McShane.
Posted by Queens Crapper at 6:51 AM

THIS KIND OF BACK ROOM DEALING IS THE WORK OF A TYRANT... PURE AND SIMPLE !

A wannabe monarch attempts to forge an alliance with the barons of City Hall and reverse Magna Carta!

If the voting public allows this
we might as well crown "hizzoner" king and be done with our American republic !

That little 5' 7" twerp certainly has a pair way out of proportion to his height!

Then it's back to the middle ages for NYC where the (land)lords of the manor continue to hold their tenants (serfs) by the short hairs! !


YOU ARE A FAILURE!

I know, just like he was running for President, right?
What next, Czar of Russia? I heard there was a vacancy.

stick around bloomie.. we need you!!!

Well, if it's in the Post then it's GOTTA be true.

He must have sat on a wind mill

Giuliani tried to do the same thing. What is it with these guys?

Quinn "has never spoken to the mayor or anyone in this administration about this," said her spokesman, Jamie McShane.

I truly believe and trust both Bloomberg and Christine Quinn. After all, if you can't trust our elected officials, who can you trust?

Take for instance this John Edwards fellow. He denied fathering a child out of wedlock when he was hounded by that dastardly National Enquirer. I trust John Edwards when he denies these stories. He has such an honest face, and nice hair also! He truly is a wonderful Breck Girl!

If we can trust John Edwards, we should also trust our tireless elected NYC civil servants Michael Bloomberg and Christine Quinn! (Even though they don't have nice hair like John Edwards!)

I know this is off-topic but since you brought it up I had to comment.
No politician surprises me but I have to say John Edwards' scandal TOTALLY shocked me. Didn't expect that from him.

The behavior of 90% of the politicians gives the other 10% a bad name.

That can't be right. Even if they somehow did away with term limits Bloomie would have to run again, right? It doesn't make sense.

Keep it on topic.

The city council is just as much to blame. But of course, no one ever says boo to them, right?

We take care of Bloomie and the world will become our oyster.

How about a letter writing campaign and sharing their reaction (or double-talk) with crappie?

Anon - Of course he'd have to be re-elected. But the simple fact that the Post is hinting that maybe possibly he's thought about the chance of considering having this kind of legislation proposed is just enough to bring out the anti-Mike in everyone, and assume that he's taking steps towards becoming Mayor for life....

Wasn't the same idea being tossed around right after 9/11 in order to keep Giuliani in office?

If he does run, a lot of skeletons in the closet will be revealed. Then the people across the U.S. would learn what people in New York City are learning, that this little dictator has done as much harm, if not more, than good for the city. People are starting to open their eyes and realize that there has been a corporate takeover.

The best example I can use at the moment is the replacement of 2 baseball stadiums. Less seating, higher prices, and a definitive corporate feel are what people are beginning to see. The mayor promised that the city had other priorities (schools, libraries, etc.)and stadiums were unnecessary...until he was re-elected!!! America's favorite pasttime is taking a back seat to corporate interests rather than the fun of the sport.

I am glad that I was alive to see Mickey Mantle, Roger Maris, Whitey Ford and many other legends of the sport play. I also remember my father taking me to see the NY Metropolitans play at the Polo Grounds. Back in the day, it was a thrill to enter the ball park and see the bright green field after watching games on a black and white television.

I am waiting for someone to say that if I don't want to go to ShitiField or the new Yankee Stadium, I could stay home and watch it on television. Oops! How many games are free these days? Most games are cablecast so there is a fee involved. Of course, the government is imposing digital TV in a few months and many households are compelled to pay for cable service or purchase a box so that they can enjoy what was once free and available to all!

To even suggest that this mayor deserves a third shot leaves me feeling great discomfort. The people of this city made it clear that they wanted term limits by their votes and now these political hacks want to reverse the process. Just say NO!!!

The very rich can buy their was into office. The rest have to raise funds and get excoriated for it. I'm not sure which is worse.

Can someone PLEASE make Bloomie go away?

Is it just me, or is he getting uglier with age?

May the true citizens & democracy prevail! He's a tyrant who's against preserving the middle class, and he's too close-knit to his developer buds.

Now for the rest of us, its the freakin city council that will actually do the overturning.

And believe me, they are dieing to do it. The gene bank in the old clubhouse is a bit thin these days, so if we can park someone in a chair for their lifetime we can delay the inevitable.

italian girl - no offense, but if you were surprised by Edwards, you should reconsider how you get your information.

No offense taken. Not exactly sure what you mean by reconsidering how I get my info. But as far as the Edwards scandal, I saw the interview he did with Bob Woodruff. I don't read the Enquirer. As I said before, no other politician would've surprised me but he did. I figured during the 2004 campaign, if there had been that kind of smut on him, it would've been found out. The Republicans are very good at digging up dirt. I figured he was a good guy. What made it worse was his wife is battling cancer. How cold could he be?

Term limits work - don't allow this to be changed - only you the voter can change this - not the office holder.

Geppetto says if the Pinocchios on the City Council come to him would consider it.

Bloomberg is not a puppet master of Quinn and the counsel but a thug who is self absorbed in press releases.

italian girl - there is a lot about Edwards that is/was questionable. The general media tends to over look his foibles.

Speaking of Edwards thats too bad because hes done great work in the past.But look what newt Gingrich did with his wife.He divorced when she was in the hospital with cancer.Theres been Jeff Gannon Guckert the male prostitute visting the white house for years and acting as a reporter for bush and co.Also Henry Hyde from Illinois the big family man divorced his wife.
But back to the corrupt land grabbing bloomie.This guy should have been held responsible for Deutche bank,the crane collapses,Columbia illegal expansion(Manhattanville) and numerous other things.This guy is the king of talking out both sides of his little....He was full of shit on the TV dealing with the second crane collpase on the Upper east side.

He will do anything to get his congestion pricing tax so he can screw the citizens in the boroughs of New York.

I would not vote for you just because of your insistence on this tax.

"Speaking of Edwards thats too bad because hes done great work in the past."