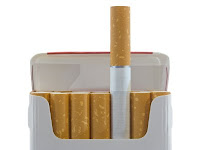 NEW YORK (NBC) -- A Queens couple is accused of selling illegal cigarettes at their store.

District Attorney Richard Brown said Tuesday that Masoom Uddin and his wife, Khaleda, have been charged with criminal possession of a forged instrument and violating the New York State tax law. They face 15 years in prison, if convicted.

Investigators learned of the scheme Aug. 12 after customs officials intercepted some 15 cartons of untaxed cigarettes from Karachi, Pakistan, addressed to the couple's Queens home.

The DA says another 700 cartons of untaxed cigarettes -- more than half of which contained forged tax stamps -- were found inside the couple's home and their video store.

A call to the couple's lawyer was not immediately returned.
Posted by Queens Crapper at 12:40 AM

Does the Queens District Attorney's office know what year we're in?

Stories such as these are the ones that the usual "diversity cheerleaders" who troll this board will come out of the wood work and say such things as:

1.) "Oh c'mon, how come Crappy always points out immigrants behaving badly. White people do these things also."
2.) "These are poor, oppressed, struggling minorities, the Queens DA should let them go. After all, those major corporations cheat just the same, and they never get caught."

Welcome to the Camp of the Saints!

The system of paying taxes, like accepting a piece of paper and calling it 'money' only works when the public accepts it, believes in it, and goes along with the system.

From day laborers, to real estate investers, to mom and pop businesses, tax collection in this borough has fallen way down.

And its often by the people who use and need the system a great deal.

For example, the family of an illegal day laborer will need education and medical services. A developer, who hid money so he did not have to pay taxes, and uses the profit to buy property, needs someone to pay to connect the the grid, ok all their plans, etc.

One of the reason the taxes are so high.

The burden falls on a fewer and fewer people.

Precisely! All these yahoo democrats who whine incessantly how we have to: spend $$$ on education; spend $$$$$$ for national health care; spend $$$$$ for social security; spend, spend SPEND!!!!

Where the hell do they think the money comes from???? If the day laborers, "saintly" immigrants importing illegal cigarettes, and other lovelies don't pay their taxes, the burden falls on US citizen SUCKERS!!!!