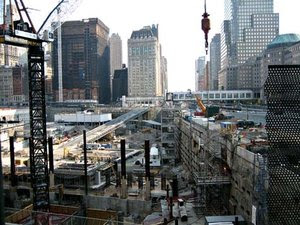 The Wall Street Journal's architecture critic has written that the World Trade Center's redevelopment is the "greatest planning fiasco in the history of the world." In a scathing critique, the critic, Ada Louise Huxtable, says the project lacks a proper leader who can maintain its vision while dealing with its politics and practical problems. Huxtable says there are so many stakeholders that the site will just be a series of real estate deals rather than a symbol of rebirth.

That's what everything in this city ends up being.
Posted by Queens Crapper at 7:06 AM

7 years later, and still just a giant hole in the ground. Our society lacks vision, and also lacks will. The Islamic terrorists didn't just bring down 2 magnificent buildings, they ruptured the soul of our nation. Our politicians simply don't care; why should the people?

Mister,
We could use a man
like Herbert Hoover again!!!!

They should just level the area and turn it into a memorial to the victims of September 11. Look at the respectful memorial that was created in Oklahoma City. No, but here, they gotta build, build, build. Structures that will be half-empty of tenants. Tell me, you'll want to work on the top floor of any skyscraper built there? Hmmnn?

BTW, speaking of history, yesterday was the anniversary of the Battle of Brooklyn (August 27, 1776; aka the Battle of Long Island, the Battle of Brooklyn Heights, etc.): the first engagement of an American national army (commanded by George Washington) against a foe, the British military comprised of Scottish regulars and German Hessian mercenaries. This was the greatest conflagration of the Revolutionary War.

Yesterday, to pay my respects to the fallen,I visited the site of the Stone House where intense combat occurred in the early morning hours of the battle (Fifth Avenue and 3rd Street, Brooklyn). Courageous acts of heroism by the American soldiers from Maryland, staved off an overwhelming British force from attacking the main army at Brooklyn Heights. That holding action coupled with a windless sky preventing an immense armada of ships (the largest assemblage of sailing vessels in the history of the world until the D-Day invasion)from advancing up the Hudson to wreak havoc on the main body of our army.

Today, the 28th of August, saw the British digging trenches for a final thrust at Washington's position on the Heights of Brooklyn.

Tomorrow, the 29th, (dare I say a sacred date in the annals of our country-deistically speaking, of course) saw Washington organizing under the cover of a heavy blanket of fog the escape of the Continental Army from Brooklyn via ferries to Manhattan.

By valiant acts of heroism and quirks of the weather, the army lived to fight another day. How ironic, that this escape route northward through Manhattan island occurred over the same geography at Ground Zero where two and a half centuries later the country was again engaged in an act of warfare.

To bad Robert Moses wasn't still around. So few people have the vision to execute a plan. Too many PC rules. Too many "interested" parties.

Too many jews running the real estate business!

In other news flashes...The sun is going to set this evening!!!

Yes too many Jews running real estate that dont care about other communities, just sending money to Israel to build more high rises for shady billionaires.Just like their plans for Harlem by Columbia, Manhattanville.All the bad condo projects in Williamsburg have the same overseas intrest.

Mybe Rudy Guliani can get his buddies in Dubai to build something there or have some more U.S. ports? He seems to speak over there quite a bit the last year or so.Not who I want checking cargo coming in the U.S.
Nice friends Rudy.