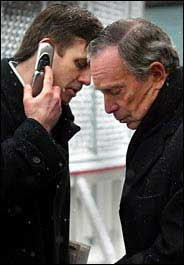 Mayor Bloomberg has a "master plan" to get on the ballot in all 50 states should he decide to run for President, a political consultant close to City Hall said.

Deputy Mayor Kevin Sheekey, at Bloomberg's request, has organized a national network of volunteers for a potential campaign and has conducted extensive research on his boss' chances of winning, according to Doug Schoen, a consultant and Bloomberg's former pollster.

"To ask your aides to do background work and statistical analysis is a reasonable and appropriate thing," Schoen told New York 1's Dominic Carter on Friday.

"[Sheekey] has done a very, very sophisticated analysis of the electorate. I think Sheekey probably knows more about ... voters - and particularly these restless and anxious moderates - than anyone," Schoen said. "And I think he has a sense as to what the electorate is looking for. And armed with that information and how the race plays out in the next two or three weeks, on both the Democratic and Republican side, I think you will see if the mayor changes his mind."

Schoen said he speaks with Sheekey once or twice a week and that Bloomberg is willing to spend $500 million on a campaign. He predicts any move would come around March 5.

Interesting thing about this Sheekey fellow. He's been working on the mayor's campaign for more than a year when he was supposed to be working for us. Actually, Bloomberg created his high paying position on the city payroll exclusively for him as a 'thank you' for getting him re-elected. And when the press questions his whereabouts, this is what they get: "This is Kevin Sheekey; I'm REDACTED, but Please Leave a Message". This of course is all done with impunity.

Photo from NY Times
Posted by Queens Crapper at 12:44 AM

If our mayoral dope does decide
to make a presidential run,
I hope he runs aground like our
previous mayor!

Both are legends in their own minds
and unfortunately at our expense!

As usual, Queenscrap and its bloggers are behind the times.
Bloomberg is definitly NOT going to run for president. It's common knowledge.
New York Governor in 2010, now that is a possibility.

"Asked about his reputation Sheekey told the Times: "My priorities are the mayor's priorities - my job is to do what he wants to get done.""

The very definition of the ultimate lickspittle lackey.

His snout occupies the taxpayers' trough, but he ruts for the ambitions of another.

How about the mayor's 'girlfriend' in charge of Hudson waterfront development?

Oh do look into that one, O Crappie!

As usual, Queenscrap and its bloggers are behind the times.
-------

Sorry, but we are ahead of the curve.

The mayor accepts no salary for himself yet steals millions of tax dollars for his own benefit. He needs to be locked up.

"ahead of the curve"

No, "you're" a loser, and an illiterate one at that!

From what we've heard
the mayor may have a boyfriend!

Not that I really give a crap which way he swings
only how he's screwing us taxpayers!

I know you are but what am I?

Like any idle old rich man,
he's got to keep his fingers in every pie.

It makes him feel like a young cockerel again.

And this presidential pie
appears to be his favorite hobby!

Would somebody please give
Der Mayor back his golden shovel
and let him go and play
in some other city's sandbox.