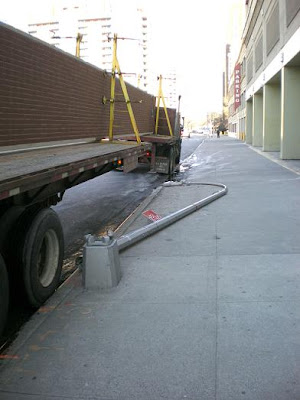 Now that I've got your attention, the cobra I was referring to is the cobra street light. This one was knocked down by the construction at the Rego Park Mall. 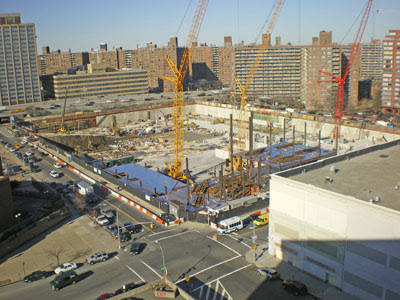 How is construction progressing? Attached is an aerial view from the top of the nearby 95-25 Queens Boulevard office building. Note the large empty triangle across the street from the future mall. A possible candidate for Greenstreets? Rego Park needs more parks.

Hey, you know what, mazeartist, I'm with you. If Queens is expected to absorb the biggest chunk of the projected 1 million new residents by 2030, we'll need more parks. Heck, we're underserved by them now. And if these folks are saying with a straight face that they expect $100 million for a 4-acre extension of an existing park, then it's not out of line to ask for a green triangle in Rego Park.
Posted by Queens Crapper at 12:00 AM

This is one ugly concrete jungle
with no architectural graces to be seen......
Soviet planning at its worst !

once straightened out the bumper on my car by repeatedly banging it into a lamppost. Guess that wasn't too bright. The pole might've come down, as here, leaving me to have to straighten out the roof of my auto too. Eventually sold that car for $50 to a chop shop in Willets Point, 20 years back. Sure got jipped. :(

I read that there were plans to expand the Lost Batallion Playground, which is across the street from the mall expansion. The expanded playground would take over the adjacent truck parking lot. Are those plans still on?

As for Eastern Bloc architeture- Rego Estates and Lefrak City take the prize for blandness.

Architechure in that part of town is certainly ugly, brutal.

Some of the worst high density in NYC.

Wonder what will happen when the old guard dies off.

If I remember this correctly wasnt that was a park called "Fairyland"
It had rides and a small gauge train from the Worlds Fair LIRR exibit.
It disappeared after Macys and the Queens Center Mall was built

that low squat beige building on the other side of the site is the Environmental Protection Agency's current headquarters.

I'm glad there's someone else besides me who's old enough to remember Fairyland! They tore it down around 1967, and I believe the Queens Mall now sits on that site.

But from the photo, QB address, and Mazeartist's mention of the Lost Batallion Hall (I used to go to Cub Scout meetings there!), I believe the RP mall project is on the opposite side of the LIE (what I still call the "Alexander's side") from where Fairyland used to be.

mazeartist.. you workin for sylvan or somethin?

mazeartist said...
I read that there were plans to expand the Lost Batallion Playground, which is across the street from the mall expansion. The expanded playground would take over the adjacent truck parking lot. Are those plans still on?

In order for Vornado not to build another commercial building on its NorthWest parking lot, the community has to speak up.

At the last CB6 meeting on Wednesday March 12, vp Design and Construction at Vornado Mr. Berger publicly announced that there were no plans as yet. This was in response to my question of how many signatures were needed to have the parking lot become a park or square. Following up on the meeting I wrote Mr. Berger a letter which explained the history of the Rego Park Sustainable Communities Coalition's Rego Park Proposal and asked for a stakeholder meeting in the middle of April. The email was copied to the Frank Galluscio, district manager, Deputy BP, Karen Koslowitz who was at that meeting,2 city council members and the Coalition's membership. Answer: we only deal with the CB 6 and Mr. Berger had the politeness to forward the email to CB6.

Everyone in Queens can call Mr. Galluscio at CB6 ( 718 263 9250)and Mrs Koslowitz (718 286 2900)and request that a special stakeholder meeting be held at Borough Hall with Mr. Berger of Vornado. Those who want to collect signatures for the Park Petition can contact me at 718-275-3932. Residents of Rego Park are invited to become members of the Rego Park SC Coalition by contacting me at gaia1@rcn.com.
Dr. Frans C. Verhagen, president, Rego Park SC Coalition.