With the exception of Yellowstone Boulevard and Apex Place, most of northern Forest Hills has been locked in a rectangular grid since at least the 1920s. 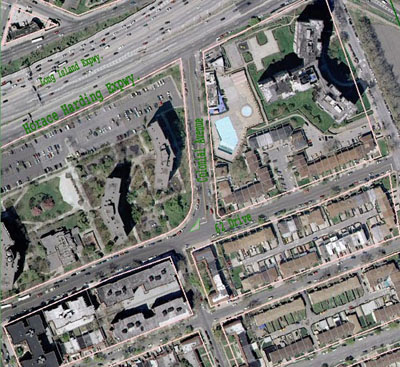 The third exception is the one-block Colonial Avenue. As its name shows, it is the oldest of all the local streets, dating back to 1655, when the settlers of Maspeth and Newtown extended a road to a new mill built on where Colonial Avenue crossed Horse Brook. The mill's founder was Captain Robert Coe, whose father settled Hempstead and purchased land for Jamaica. 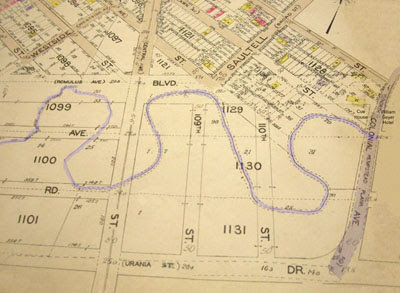 The road was later extended across Flushing Meadows towards Flushing and points east and dubbed the North Hempstead Plank Road. Coe's Mill faithfully served the local residents with corn and wheat until it became obsolete in the 1860s. It also served as a farm and hotel. Even after the rest of Forest Hills was forced into the grid, Colonial Avenue was allowed to maintain its skew due to the Coe House. 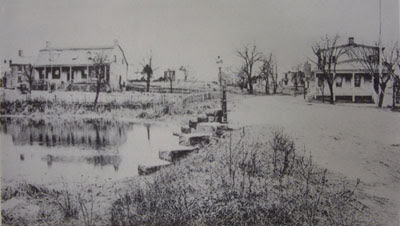 In 1930, it was unceremoniously demolished to make way for the Horace Harding Expressway. In just one swift move, three hundred years of history were gone. A charming farmhouse replaced with a ribbon of concrete. If Robert Moses could make the BQE snake around Brooklyn Heights, and the Northern State Parkway to dodge Old Westbury mansions with a 90 degee turn, why didn't he spare the Coe House by having the LIE snake around it as well? Maybe it's about money and power... 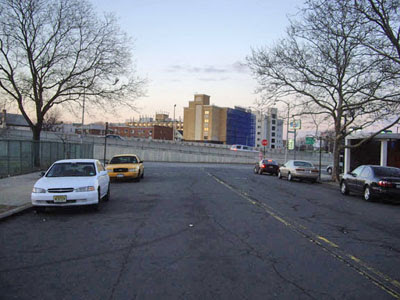 Today, all that is left of Horse Brook and the Coe House is the off-grid skew of Colonial Avenue.

Attached is a photo of the site prior to 1930 and today. Also attached are two maps showing the site then and now. Please note that the old photo of the Coe House is from Vincent Seyfried's book "Story of Corona". - mazeartist
Posted by Queens Crapper at 12:00 AM

I don't know what to feel first....anger or disgust....
when I look at before and after scenes like this.

Maybe it's time to pop a "downer"!

There were so many
17th century houses still standing
that bit the dust from the 1900s
through the 1920s!

We've lost a lot and we're losing more each day.

And our "elected" SCUM
doesn't give a flying f--k about it!

Great post, Mazeartist! When I lived in the Fairview in the mid to late Sixties, before the FH Houses were built, Colonial Ave was even worse than it is now . . . it had the vacant lot on one side, and was littered with trash, potholes, and abandoned, stripped cars.

I also remember Apex Place, because the playground for my preschool (Forest Park JC--do you know if it's still there?) was at the corner of Apex and 63rd Drive. I have two photos of my brother and me standing at that same spot 25 years apart: 1963 (when I went to the preschool) and 1988. I can scan and send them to anyone who may be interested.

I would be very interested in seeing any other old north FH pics you may have. Thanks for sharing this info!

If you have old photos of Colonial Avenue or Apex place, you can either send thme to me or to Kevin at Forgotten-NY. We're working on a page about Horse Brook, a long-forgotten stream.

What I really need for the page is a photo of the Forest Hills Houses block before those projects were built. My email can be found on my site, www.mazeartist.com