When kooks own landmarks 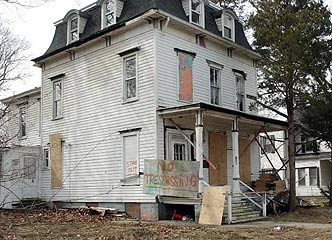 A Tottenville house that was vandalized by its builder-owner, landmarked by the city and then left to deteriorate over the last three years is about to suffer another indignity -- foreclosure.

Pre-foreclosure proceedings against the house at 7484 Amboy Rd., also known as the Bedell House, have begun, public records show.

Landmarked home to suffer another indignity

Owner John Grossi said last week that he's prepared to let the building "go back to the bank."

"I won't put another dime into the property," Grossi said.

Back in March 2005, he was preparing to raze the house he had just purchased when the city put a hold on his demolition permit, saying it was considering preserving the house through landmarking.

Grossi responded with a spray painting tantrum that left the house covered in neon colors and nasty messages.

The city pushed back by officially landmarking the home.

Hey remember when Joe Crowley told a lady from Queens that she needed an owner's permission in order to get a building landmarked?
Posted by Queens Crapper at 11:23 AM

joe crowley does not even represent astoria. his district contains a slice of queens, where all his relatives live and a big part of the east bronx, where nobody votes, that's how he stays in office.

Its in his distict in Woodside.

But the question we should be asking ourselves, is how can a public official make this statement, and get away with it?

Reshuffling LPC staff, as some think, will not address this problem.

I am curious, though, why the presevation community has not prevailed upon city council to pass legislation to make this behaviour very expensive for the owner.

There was a Demolition by Neglect bill passed in 2005.

what the Park's Department is doing to the NYS Pavilion isn't really much different than this.

Ooookkkkaaayyy, and does the bill have teeth?

Or should we say, is everyone just standing around, or is someone doing something about this?

Leave it to a dumb angry "goombah" mouth breather
to insult all cultured New Yorkers of Italian descent!

Where's HDC and "our friends" at
the ole Landmarks Conservanc-eeeee?

This is happening all over, even in Long Island (Manhasset) where a funeral parlor owner (Sunset Chaples) on a corner lot wanted to raise his own house.
He couldn’t get his way so he has the drilled holes in the roof, knocked out windows and even placed his own rats in the building.