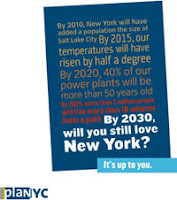 To The Editor (Queens Gazette):

I attended the Auburndale Improvement Association's meeting on Tuesday, February 19 in order to show support for the rezoning effort taking place there, which, like our Maspeth-Middle Village rezoning study, has been going on since 2005. What I heard was both disheartening and familiar.

Auburndale was apparently told that they were at the top of the list to be rezoned just prior to the 2005 election. Their community was given false dates for study completion and was pushed to the bottom of [the Department of] City Planning's priority list because the massive upzoning of Jamaica, the taking on of the Willets Point project and closed-door meetings with private developers were made priorities. This is the exact same scenario that we have experienced in our neighborhood.

I heard one attendee suggest that members of the Auburndale civic organization assist [City Planning] with the surveying work that needs to be done. The Juniper Park Civic Association did just that in 2005- every house in the zone was surveyed and the data was handed over to city planning. All of that effort was wasted because it didn't expedite things one bit and we are still waiting for our rezoning plan to be certified. During this time, teardowns of one-family homes and the erection of multifamily dwellings have been epidemic.

This leads me to conclude that City Planning has a standard set of excuses for communities redlined for overdevelopment. They keep stringing us along with empty promises hoping we'll finally get fed up and either stop asking or move out. Somehow I doubt that Queens Director of City Planning John Young lives in a community that is plagued with oversized McMansions or multi-unit Fedders houses. Neither do City Planning Commissioner Amanda Burden or Mayor Michael Bloomberg. Why should they care about solving our problems? There's no election coming up and it's much more fun to talk about the fantasy land that they envision NYC being in the year 2030 with a million more people. Unless something is done to stop the rampant destruction of our neighborhoods, there won't be a livable Queens to look forward to in 22 years.

Christina Wilkinson
Maspeth
Posted by Queens Crapper at 12:15 AM

Thank god for people like Christina who don't suck up to do-nothing paper pushing puppets like John Young, or corrupt community-raping parasites like Councilman Dennis Gallagher.

This is a dark day, and many of us are angy. We must NOT let the anger fade, rather make a committment to expose and ridicule those who do the bidding of overdevelopment - politicians, billionaire mayors and city agencies alike. They aren't just promoting the problem, they ARE the problem.

Well, you are not going to get anywhere when QCC helps Dutch Kills upzone (while they of course downzone) and Avella votes for East River development (while getting preservation on the front burner in eastern Queens) and certain preservatinists talk nicely to eastern Queens (while they curse out western Queens residents)

No the problem is not developers or politicians or the city. Fungus always flourishes in the right conditions.

And its our fellow preservationists who spread the shit for them to thrive.

They want Queens to be a "Soweto" to complement their vision of a thriving Manhattan "Johannesburg" where Bloomberg and his cronies will get ever richer. That is why they push so hard for construction of fedders crap housing, they know no one would ever want to raise a family in those hell holes, they are barely disguised worker hostels. They need a million new workers to wipe their fat butts and pour their wine.

So where are our mainline preservation reps from Queens.

Ok they are getting stuff for their community and dumping on everyone else.

That will come back to haunt them.