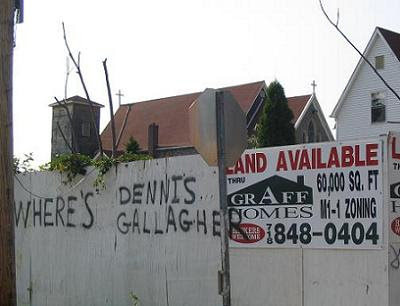 Well, folks, we all knew it was coming. The $1 million Dennis Gallagher claimed to have secured in the 2008 Parks budget never existed. Here are some excerpts from articles about the proposed church move where Pinky reveals himself:

"Since the money had been allocated to the Parks Department, the councilman said by process it is impossible to switch the funds to purchase the site without a budget modification, followed by a Uniform Land Use Review Procedure (ULURP) hearing.

The entire process could take well over a year, and during that time span Saint Saviour's could be demolished." - Queens Ledge, 2/21/08

"...Gallagher told the Times Newsweekly that while he supports the project "if it can be done with private money," securing public funding for the endeavor out of the city budget would be difficult.

The original $1 million procurement, which he said was allocated to the Parks Department budget, must be transferred to the city's General Services fund, a maneuver 'which normally isn't done until the adoption of the city budget in June'.

In order to acquire the church, Gallagher added, the transaction must go before the city's Uniform Land Use Review Process for approval, which he said could take up to a year to complete." - Times Newsweekly, 2/21/08

Hmmm...wow I don't know where to begin. Let's start with the fact that the $1 million was never in the Parks Department budget. How do I know this? I have an e-mail that was forwarded to me that says so:

"While it would be desirable to have more open space in the area, we have no funding whatsoever to advance the acquisition of this site, let alone future development and maintenance funding." - Assistant Commissioner for Planning Joshua Laird, 11/2/07

Mr. Laird also reportedly said the following to Simeon Bankoff, Christabel Gough, Tony Nunziato, Mary Jablonski and Christina Wilkinson at a meeting at the Arsenal on 9/7/07:

"There is no money for St. Saviour’s in the 2008 Parks budget. If there was a million dollars in our budget for this project, I would know about it."

Now, let's move on to the ULURP smokescreen. This would not be a ULURP project, as the city would not take possession of the land the building would be on. The money would be donated to All Faiths Cemetery, a not-for-profit, as a capital grant. Kind of like the expansion of the Catalpa YMCA (a private entity) that Gallagher constantly brags about:

You'll recall that Gallagher's original plan to buy the piece of property the church sits on and make it Parks Department property would have required a change to the city map that would definitely have had to go through the year-long ULURP process, so his excuse makes no sense.

Here's the budget. Look under "Parks" and see if you find it yourself.

Let's face it....
THERE'S PLENTY OF MONEY OUT THERE
for buying or moving St. Saviour's
if the city WANTED to spend it ....
but they're CONVENIENTLY crying "poverty"!

Kingsland House, home of QHS,
is PRIVATELY OWNED
but sits on Parks Dept. land .
They get grants up the wazoo!
(The city, I believe, even picks up the tab
for their Con Ed bill) .

Plenty of $$$$$$ was spent to move it
to its current location in the late 1960s.
(A one hundred year old house,
previously occupying that site,
had to be demolished to make way for Kingsland...which NYC paid for).

The old Quaker meeting house in Flushing
just got a $500,000 restoration grant from NYC.
Since this is a religious institution
(normally NYC can't make a direct donation) the money had to have a "pass through"agency....no problem in the end....THEY GOT IT !

The original $600,000 refurbishment estimate
for Theater In The Park
(shoddily built on temporary pilings)
has climbed way up into the millions!

Flushing Town Hall
got saved PDQ and ran up their "restoration"bill
through the stratosphere...to Jupiter and beyond!

We could go on and on and on!

And what does St. Saviour's get?
Why, of course, the boot from our crooked
political/real estate/clubhouse!

I hope that C.M. Gallagher gets at least 20 years
for raping an individual constituent.....
and sentenced to an eternity in hell
for doing likewise to an entire community!

Pinky probably spent the money
on his bar tab and on classes
to improve his pickup line!

I hope that cell mate Bubba
has barbs on his member!

I called that one long ago on Pinkey, that was a given

I looked at all the bad and the ugly and ask one question ?

What the hell are all these Israelis doing on our commissions, Park's, Banks, Government ?

These shady charactors only to take care of their "friends and brothers"
I could see why Pinkey is in so deep with them.

....Worst group to be involved with American instution, landmarking.
They act like savage fire Ants !