Steamroller runs out of steam 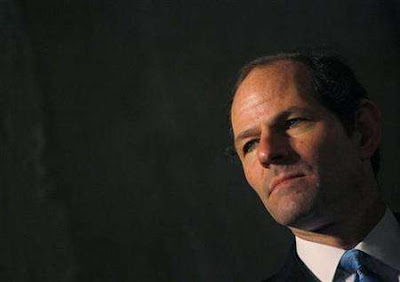 Eighty percent of New York voters say Gov. Spitzer has done nothing to improve the state or has made it worse since promising that "on Day 1, everything changes," a devastating new poll showed yesterday.

The Siena College survey found a mere 15 percent of voters believe that Spitzer has made New York a better place to live since taking office on Jan. 1, 2007, after a historic landslide election victory, while 22 percent said things have gotten worse.

Fifty-eight percent said Spitzer had made no difference at all.

Of course, this comes on the heels of this revelation:

Declaring that his administration would adhere to high ethical standards, Gov. Eliot Spitzer moved in early 2007 to ban his appointees from campaigning for political office, including fund-raising and spending to promote a candidacy.

But one of the top aides inside the governor’s office, Sean Patrick Maloney, has spent more than $30,000 over the last year from his old campaign account to maintain his political contacts. Since joining the administration in January 2007, Mr. Maloney has paid a consultant, held a party for dozens of supporters and a reunion of his campaign staff, maintained a political Web site, paid a software company to maintain his donor list and sent out thousands of holiday cards.

The money came from the account that Mr. Maloney established in 2005 to finance his run for attorney general in 2006. A spokeswoman for Mr. Spitzer said on Tuesday that Mr. Maloney, the first deputy secretary to the governor, is not in violation of the executive order Mr. Spitzer issued Jan. 1, 2007, because he is not a declared candidate for office.

After pledging to loosen the grip lobbyists have on the state Capitol, Gov. Eliot Spitzer on Tuesday defended a fundraiser next month being held for his 2010 re-election campaign by a top Albany lobbying firm.

Falling back (into the arms of lobbyists?)

Patricia Lynch and Associates, which last year was ranked as the third largest lobbyist in the state, is holding a $1,000 per-person fundraiser for Spitzer on March 7 at the St. Regis Hotel in Manhattan.

Meanwhile, Lt. Gov. David Paterson said he would refrain from future fundraisers in Albany during the legislative session after the New York Daily News reported an event for Paterson was held over the weekend - potentially violating new campaign-finance standards put forth by Spitzer and Paterson....

We've got your number, pal.
Posted by Queens Crapper at 9:43 AM

Yea, and if the local press was not in the politicans/developers pockets, we would be reading the same about them.

Instead, when it comes to local politics, all we get is glassy eyed drool.

And when it comes to the community boards, well all I can say, is, its a Dirty Job and someone has to do it.

Could be much worse....another Cuomo!

Lots of people on these polls are too young to remember his 15 years of liberal hell, gun grabbing, freeing murderers, North Shore LIJ hospital curruption, refusing the death penalty, "come to NY and get” it welfare for 1 million Caribbean Pakistani refugees with our tax dollars as our bridges and statue of liberty were falling down.

I've said it before and I'll say it now: Spitzer is a douche bag!

What do you expect from a son
from a wealthy real estate family.

The same you'd expect from any other
son of a bitch!

Dirty or clean....
most CBs don't do their job at all
(not counting, of course, the hand job it does
on its constituents) !

CB#1 is a prime example.
The community board from hell!

I predict Bruno picks up 3 seats this fall.

Bruno seems to be the real one running the state, judging by how much power he weilds. Taking a dislike to Spitzer he's removed him from office in all but name.

Take Spitzer and his brother Bloomberg, and lets trade them to get Guliani back ASAP!!!!!!! Who are Spitzer and Bloomberg looking out for anyway? Not me I can assure you!!!

"Could be much worse....another Cuomo!

How quick the voters forgot about his son's involvement in the HUD scandal too! I wonder how many developers are in his pocket now that he is attorney general.

Hard to say if Spitzer is worse than Cuomo. We're still reeling from bad decisions Cuomo made. Spitzer's have been layered on top of them. A difference is that Cuomo at least knew he had political limitations. Spitzer acts like he's a king.

Take Spitzer and his brother Bloomberg, and lets trade them to get Guliani back ASAP!!!!!!!

Guliani - a shoo-in for Gov. watch him turn around this state and put it back on the map of the USA. In - like - Flynn Guliani he should run for Sen. Shumer's seat in the interim, shake up the leadership big time.

Spitzer never had any steam to roll with....
only hot air to blow all over the place!