Some friendly words of advice 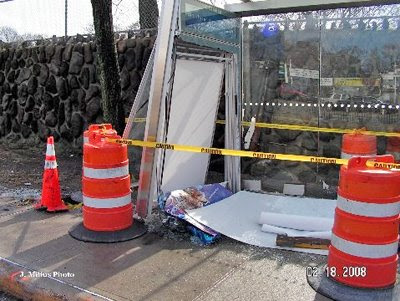 I visited a young lady from Jackson Heights, by way of Katmandu, Nepal in Elmhurst Hospital the other day. Ongma--pronounced Uoom-ah---twenty-four years old, works as a waitress in the Aubergine Cafe on Skillman Avenue. She brings me my tea and coffee almost every day, sometimes along with her older sister, Maya. These two are very polite and friendly, cute, always smiling, chatting with me about my photography, and telling me about her own photo courses at Laguardia College.

Seems that Friday night, on her way to a friend's house after work at five-thirty, she was hit by an out-of-control yellow cab which mounted the curb on Queens Boulevard and 52nd Street. She told me that she was sitting on the bench when the cab driver, making an illegal U-turn across eight lanes, lost control and plowed into the newly-constructed bus shelter by the Calvary Cemetery entrance. She said that she was just able to stand up a split second before getting hit. If she had remained seated, the bumper of the cab would have hit her in the head full-force. As it was, she sustained a broken hip and bruises as she was thrown against the aluminum and glass partition. Fortunately, no scars on her pretty face or delicate arms. I brought her some flowers and gave her the number of a reputable husband-and-wife legal team that I knew and trusted. Then I thought of all the people I know living paycheck-to-paycheck without savings, without insurance coverage, without any kind of protection. It put my stomach into a knot.

I also brought her some pictures, included here, for her to give to her lawyer. However, I also thought I'd write this piece and include a caution to all readers out there: Just Google "low-cost disability insurance" or go to this link ---and please, think seriously of signing up with a good company. You never know when it will come in handy. 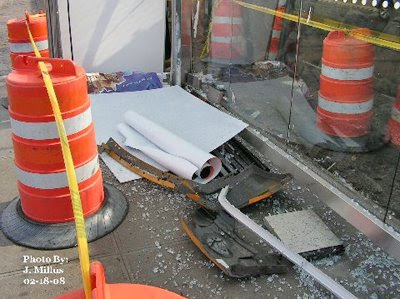 John: I'm glad you were able to document some of the mess and that this young lady may get legal advice. I live near the cafe you mentioned and it is a lovely addition to the neighborhood (and the cafe itself has been hit by cars!)

I wish something would really be done about this Boulevard of Death. This happens far too often.

I was wondering what happened to that bus shelter. And that is along the "not so bad" part of Queens Blvd, where it is not as chaotic as it is further east in elmhurst or wide like in Forest Hills.

I hope this young woman is ok, and the cab driver is held responsible for making such a reckless move.