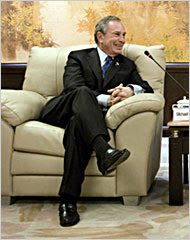 Advisers have said Mr. Bloomberg, a billionaire many times over, might invest as much as $1 billion of his own fortune (he spent about $160 million on his two mayoral races) on a presidential campaign.

The key players — virtually the only players — in Mr. Bloomberg’s embryonic campaign are three of his deputy mayors, Kevin Sheekey, Edward Skyler and Patricia E. Harris. Another aide, Patrick Brennan, who was the political director of Mr. Bloomberg’s 2005 re-election campaign, resigned as commissioner of the city’s Community Assistance Unit earlier this year to spend more time exploring the mayor’s possible national campaign.

That's funny, I thought Brennan resigned to join the Parkside Group. Will they be running Bloomberg's campaign?

I can't imagine the country falling for Bloomberg's propaganda once they realize he believes in a sanctuary policy for illegals.

Let's not forget his abuse of eminent domain and tearing down forests full of healthy trees.

No, the real deal breaker will be when the country realizes they will have to listen to his nasally, monotonous speech pattern delivered in his trademark aloof manner every day for 4 years.

Something about this Patrick Brennan character smells funny. How can he have recently left City Hall, be working for a lobbyist and campaigning for the mayor?

Let's all hope that this little elf spends all his money on his ego trip.

What's his claim? To be the first faggot elf to run for president?

There are some good results to look forward to: He probably will take Parvizi so he has catering at all his lavish events.

He will want DOB Commissioner Pat Lancaster along to handle any police necessities.

Benepe can tag along too. He is a magnificent lackey; he'll do whatever he's commanded to do by Parvizi.

Perhaps many developers will contribute to Bloomberg's campaign in the hopes that the elf will rip up the national forests so they can build more "affordable housing" for the illegal aliens he will set loose over the borders.

Frieden of the Health Department will want to join the campaign. The Commissar will need somebody to tend to the health needs of those same illegal aliens. Bloomberg can re-institute the draft to enlist legal citizens to serve all the needs of the illegals.

Bloomberg doesn't stand the chance
of a snowball in hell pitted against all the rest of those
charismatic candidates that are running in this presidential race.

He's perceived by a lot of voters out there in the heartland as a short, whining, wimpish. N.Y.er.

The people that make out like bandits are always the middlemen.... in this case the "Darkside Group".

Hello Evan..... how much money have you got in the bank?

Oh it's in mamma Toby's name.

Not to mention that he loves Israel more than NYC and we'll be attacked by terrorists like never before.

Especially since he welcomes terrorists in by supporting an open door immigration policy.

I don't see how this little dictator will be able to get along with foreign leaders. He likes things his way. Managing the US is not like managing NYC.

He CAN'T even manage NYC.
He tries to run it like the CEO of Bloomberg Inc. !

This city can't just be run as if it were a business.

Imagine this diminutive soul as president.....
having to stand upon a stack of telephone books
every time he holds a state of the union address
in the oval office.....yeah....right!

He'd conduct it like a Kafkaesque
annual stock holders' meeting!