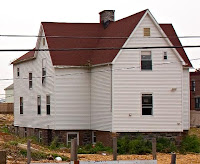 The historic St. Saviour's Episcopal Church is up for grabs - for a cool $10 million.

A Richmond Hill broker has been hawking the Maspeth property on Craigslist and other Web sites for more than two weeks, the Daily News has learned.

The online listing informs deep-pocketed prospective buyers they "can build up to 85,000 [square feet] of residential" on the "vacant land."

...the developer said the compromise did not get the blessing of the City Planning Department - a charge Planning officials have disputed.

The owner said the aborted deal "puts the church in jeopardy."

"When my upside is taken off the table, then so is the upside of my concession," he added.

This raises some questions.

1) The property has been up for grabs for $10 million for more than a year and a half now. So why do the owners constantly give the runaround to interested potential buyers when they ask to meet with them to negotiate a price? Could it be that the property really isn't for sale?
2) If it's zoned for manufacturing, how can the developer advertise it as "residential"? Isn't this against the law?
3) Why did the owner agree not to do any demolition or excavation on the property until environmental and archaeological studies were completed to the satisfaction of DEP and LPC and then proceed with this demolition anyway? Why did the city allow this when they were the ones who informed the owners about the issues?
4) "Well, the original plan was to fix the exterior of the church and donate it to a not for profit. City Planning then demanded to know to whom it was going and wanted to see a budget to ensure that they could fix the building and run programs out of it. As this was causing additional delays we figured City Planning couldn't argue with us if we said we'd fix it and keep it for ourselves. Even after that they wanted additional assurances about the use of the building. So that's how we came to that decision. So now it's not just that the building is preserved at my expense, but now I'm supposed to just hand it over. Take and take and take.... Hmmmm. I wonder why the application was pulled." - why was this comment left on the previous St. Saviour's post by someone with inside info, but the application-pulling story told to the Daily News blamed a dispute over density? (City planning's version of events more closely matches the QC comment.)
5) Why is this developer leaving dumpsters full of waste all around the neighborhood and getting nothing more than warning phone calls from DOT? Why are no elected officials doing anything about this?
6) What the hell is really going on here? Anyone?
Posted by Queens Crapper at 6:46 AM

I can tell you what's going on here. We have shady businessmen from Israel looking to make a quick buck and our mayor, who loves to plant trees in Israel, allowing a forest in the city he represents to be destroyed. But that's ok, we can always plant saplings along the sidewalk.

It's quite fitting that Councilman Dennis Gallagher now stands alone, much like the church, his life in shambles just as the church grounds are, and his reputation in the same condition as that parsonage.

The reporter should have gotten a quote from Pinky. I'd LOVE to hear his explanation for your questions, Crappy.

They will remove it.

Don't just go after Pinky. Half of our problems out here in Queens are from the little games the preservation community plays with us.

Remember a few years ago when we all got flooded with those annoying e-mails from Landmarks 'Pest' about 2 Columbus Circle? A veritable blizzard, as I recall.

Well HDC? You have a Queens chair now. Perhaps you can take a break from those big $tudie$ and send out blast after blast for this, too.

Start to work for your Queens support your little buddies out here always assure you that you have.

(Hint: If you are aware that the destruction of this site might spell the end of the landmarks law, you might be a little more PROACTIVE!!!!)

My sources tell me that the property has recreational potential. It will be turned into either a water-park, a paint-ball facility, or a bowling alley.

Hey full of crap now is your opportunity to buy this property and donate it so we can have a park . Once and for all put up or shut up.

Let's make a down payment out of Gallagher's salary!

Sure, lets all pool our taxes and buy the property. We can take out all the money used to fund developer tax breaks and all the city resources they take with no cost to get their projects up.

That shady Israeli has the chutzpah
to blackmail and torture a community
first with lies, tree butchery and now demolition....
while our our mayor plays his fiddle
(or whatever he plays with in private) !

That site is not for sale at all !

It's all just a desperate poker player's bluff
when he's holding nothing.

In this case what the owner is holding
is contaminated land
containing a historic churchyard
where souls are buried
and an archaeological dig is required by law!

And, of course, "Danrich"
(h-m-m-m....or should it be"rich Dan".....
hopes to make a lot of gelt from this one)
can't get a certificate of occupancy
without a zoning change!

Meanwhile.....
the inpatient....short of cash
(trial lawyers are expensive)
Gallagher is waiting for his finder's fee
to pay his legal bills!

You can wait Pinky....
as Bubba is waiting for you.....
you piece of municipal trash !

I build them fast and cheap, no garages.

A lot of people from Pinkys street thug, dope smoking past are really looking forward to seeing him in the bighouse.
He backstabbed, double crossed, sold out ....so many.
His career is over and his day is coming and its not going to be pretty.
There are so many people !

Prison is the pits. Besides rape, inmates get beat up, stabbed, and sometimes killed.

Well as the saying goes, what comes around goes around. You do somebody wrong and you're gonna get your comeuppance, in unexpected ways sometimes.

Maybe you might be crossing the street, with some packages, then bam, just like that, it's all over.