Bring those books back on time! 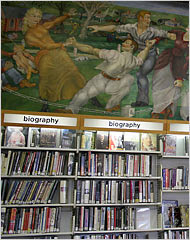 Eleven years ago, the Queens Library system, the largest in the nation by circulation, hired a professional enforcer to collect the 25-cents-a-day late fines as well as missing library materials from books to DVDs to rare musical scores.

Late at the Library, and in Trouble at the Credit Bureau

The gambit has paid off handsomely. The haul so far: $11.4 million, about half of that in fines. That’s a lot of quarters.

Borrowers who fail to return Queens Library books can be reported to a collection agency and to a credit bureau, with a damaged credit rating as a result — a tactic that so shocked one Far Rockaway rabbi that he filed a lawsuit. The collection policy also has pulled libraries — places where generations of children have learned moral lessons about returning what they borrow — into the debate on just how much punishment is appropriate for failing to return a library book.

Photo from NY Times
Posted by Queens Crapper at 12:46 AM

Scene from Seinfeld, in which Bookman, the library cop, pays a visit to Jerry about a long-overdue book:

Well, let me tell you something, funny boy. Y'know that little stamp, the one that says "New York Public Library"? Well that may not mean anything to you, but that means a lot to me. One whole hell of a lot.

Sure, go ahead, laugh if you want to. I've seen your type before: Flashy, making the scene, flaunting convention. Yeah, I know what you're thinking. What's this guy making such a big stink about old library books?

Well, let me give you a hint, junior. Maybe we can live without libraries, people like you and me. Maybe. Sure, we're too old to change the world, but what about that kid, sitting down, opening a book, right now, in a branch at the local library and finding drawings of pee-pees and wee-wees on the Cat in the Hat and the Five Chinese Brothers? Doesn't HE deserve better?

Look. If you think this is about overdue fines and missing books, you'd better think again. This is about that kid's right to read a book without getting his mind warped! Or: maybe that turns you on, Seinfeld; maybe that's how y'get your kicks. You and your good-time buddies.

Well I got a flash for ya, joy-boy: Party time is over. Y'got seven days, Seinfeld. That is one week!

Do you know that if you have a bad credit rating
and you're seeking a job.....
you might be turned down just for that reason?

It's true!
I just spoke with somebody who was told
just that !

So.....if you're stuck in debtor's prison.....
you can never work your way out.
Didn't we fight a revolution to end this
type of practice?

There's less and less of a need to go to the library anymore. More and more books are found in their entirety on the internet. Google the "Gutenberg Project".

A rabbi who can't pay his library fine is filing a lawsuit? So much for ethics and morals. Shame on him! (by the way, I'm also an observant Jew)

The library lends books and videos to anybody on just a signature and promise to bring back whatever you borrowed. Is there any other organization in this city -- on this planet! -- that would consider operating solely on that bond of trust?

Of course they should go after the evil-doers. If you don't think so, may I borrow $50 from you?

Oh I don't know George......
the Main St. Flushing library seems to
be splendidly fulfilling its job
as a good place for some old Asian men
to grab their 40 winks.

You think that catching a quick cat nap
without snoring is an easy task ?

Until the guard spots them and wakes them up.

Hey C.M. Liu.....
do you have a couch in your district office
where these guys can crash for a spell ?

There was a Broadway musical in the very early '60's called "Subways are for Sleeping". It starred among others Orson Bean, Carol Lawrence and Phyllis Newman. The Transit Authority refused to run ads for it thinking that the title would indeed encourage the homeless to...ta-da...sleep in the subways.

Now, if any of you young whippersnappers out there had a brain in your head, you could easily write an up-dated musical to the title...ta-da again..."Libraries are for Sleeping".

[Blogs are for Sleeping.]

Lot of bad reporting and mis-information in this story. The credit union doesn't go after people with unpaid fines--they go after people who have checked out materials and then never returned them. It's the replacement cost that the library is after and they (and the collection agency) initiate numerous contacts over a period of many months before a credit bureau every gets notified.

A version of this "story" surfaces in some city every few years and inevitably the media just can't resist getting it wrong. A few years ago it was a story in Florida "Single mother thrown in jail for unpaid library fines". That got national play. The fact was the library took her to court get her to return hundreds of dollars in materials that she checked out and didn't return. Then single mom blew off court, and the judge put her in jail for contempt, not for failure to pay fines. But the true story ain't no fun. Same deal here. The NY Times blew it. Oh well.