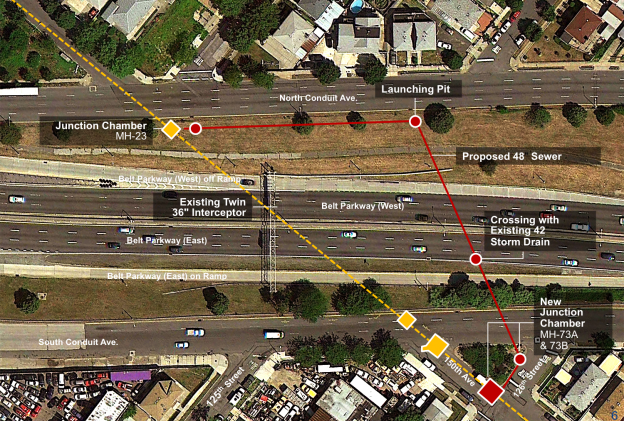 Hundreds of millions of gallons of raw sewage that now overflow into ecologically fragile Jamaica Bay every year will be diverted to treatment plants under a new project being launched by the Department of Environmental Protection (DEP).

A new $40 million initiative split into two smaller projects is set to begin in 2015 in South Ozone Park by the Belt Parkway to reduce sewer overflows into both Bergen and Thurston Basin, two bodies of water that ultimately lead into Jamaica Bay.

City officials said they are taking pains to minimize the impact on traffic along the Belt Parkway from construction of one of the new sewage overflow pipelines that will cross under the highway.

The project is designed to ensure that about 300 million gallons a year of combined sewer overflow will be routed to the Jamaica Wastewater Treatment Plant, where it will be treated to Federal Clean Water Act standards, rather than being discharged untreated into the tributaries of Jamaica Bay.

As of now, there are two 36-inch sewer lines carrying sewer overflow from North Conduit Avenue under the Belt Parkway to 150th Street and 126th Avenue. When they reach that point, they connect to a 72-inch sewer line, ultimately bringing all that overflow to the Jamaica Wastewater Treatment Plant.

The DEP said that due to increased development of southern Queens, the existing pipes “no longer have sufficient capacity to carry combined flow generated north of the Belt Parkway and act as a bottleneck in the area’s drainage system.”

Once again, why was development allowed without improved infrastructure in place first?
Posted by Queens Crapper at 12:04 AM

The Jamaica WWSD treatment plant already has outflows to Jamaica Bay... so I fail to see how this helps.