Is this the final nail in Flushing's historical coffin? 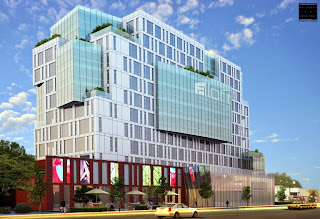 Great Wall Supermarket, on Northern Boulevard and Leavitt Street, will be replaced next year by a glass-clad, 11-story building after the supermarket’s owners decided to not renew the lease, according to city records. The proposed building’s modern, sleek look will tower next to the Civil War-era Flushing Town Hall, causing many in the community to criticize the new building for not conforming to the appearance of its historic neighbor.

“This thing looks like it’s something out of Miami Vice,” Flushing resident Vincent Amato said. “You can kiss goodbye any sense of history this neighborhood still had.”

Despite community resistance, Community Board 7 passed a request to change the area’s zoning, allowing the building’s developer, George Chu, to move another step closer toward his goal of developing a mixed-use building with a hotel, store fronts, community space and apartment units.

Flushing Town Hall wrote a letter expressing their support of the new development, and the planned community space will be used often by Town Hall events. During the community board meeting, the board members defended their decision to allow the building to be constructed.

“We’re not granting something that’s significantly different then what could be there,” Chuck Apelian said. “None of us are negligent of the history.”

As the meeting ended, Apelian said, “This is a tragedy not just for Flushing, but the whole nation. Hundreds of years of American history will be overshadowed by this new building.”

So, Chuck is opposed to the building, but voted for its zoning change anyway? WTF?
Posted by Queens Crapper at 12:40 AM

I think a shiny new building is a big improvement over the dingy Great Wall "Supermarket" that stinks up the street.

Who cares if it is next to a historical building? Flushing has lost its "history" a long time ago; it's a Chinatown now.

One less Chinese supermarket and the prospect of something clean and modern seems a lot better than the filthy status quo that is colonized downtown Flushing.

How do you know that it won't be a Chinese supermarket again? Some people just can't see the big picture and deserve Chuck Apelian for eternity.

It is time for Chuck Apelian to step down. Community board 7 is to be held responsible for their part in the ugliness and over development of once historic Flushing. I have little respect left for this bored board. Wellington Chen once referred to Flushing in the press as "A crappy little Chinatown". Does anyone disagree?

Chuck Apellian's comments make no sense. They are contracting and he is most likey the culprit for allowing the zoning change and this stupid soulless building. Community Board 7 is corrupt.

You wish. In 10 years it will look like the red light district in Kowloon.

Anybody here remember when that Great Wall supermarket was a (gulp) Sears?

"Anybody here remember when that Great Wall supermarket was a (gulp) Sears?"
Yes, I used to buy tools and car parts there. Bought my Die Hard batteries there as well as garden tools.

I think they should turn Flushing into an Oriental theme park with a replica of the Great Wall of China surrounding it. Maybe that will bring tourism to this forsaken shit hole.

For all the Asian seniors? Why not a McDonald's so they can sit and sip a 99 cent coffee for six hours?

Or snooze in the Flushing library! I have seen the library guard going around waking up these sleepers. What a low class third world downtown area the hub has become. Tourism is the answer...let's encourage it...LOL!

Final nail in the coffin? Flushing what's buried twenty years ago. Time to shut up and bear it or move. I already pulled up stakes for the rosier life further east.