Land abandoned by city was cared for by residents 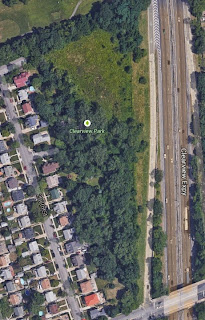 Residents of Bayside, Queens, insist that they really did take good care of the six acres of parkland tucked behind their homes along 207th Street. For years, that narrow strip along the Clearview Expressway between 23rd and 26th avenues had been a place where neighbors played baseball, rode bikes and walked their dogs.

And because the city had abandoned the property, area residents regularly mowed the grass, planted trees and shrubs, cleared walkways and in some instances built garden sheds on it. But when officials at the city's Parks Department finally got wind of what was going on, they cried foul.

In May 2010, the Parks Department sent out a blizzard of letters demanding that homeowners "give back the land" and remove any and all fixtures placed on city property. Outraged residents protested, but in the end, after a heated two-year battle, the city prevailed.

Now the Parks Department is hoping to build on that success, using it as a model to go on the offensive against what turns out to be a surprisingly widespread problem in the city. Currently, the agency, which oversees the city's 1,700 parks, has 89 cases of "incursions" on its plate. Queens, a borough noted for its green space, leads the pack with 49. In addition, there are 22 active cases in Staten Island, 14 in Brooklyn and even four in Manhattan. Only the Bronx has no such cases.

Meanwhile, the land on which the city triumphed over area residents sits vacant, and there are no plans to develop it for public use.

I gotta wonder if the release of this statement is just a coincidence.
Posted by Queens Crapper at 12:31 AM

Some parkland is intentionally left undeveloped for the benefit of the flora and fauna.

That is true, however, they were planning to move full steam ahead on the Ridgewood Reservoir up until a few months ago.

A friend knows an owner of a house that abuts this piece of property. The guy erected a shed that imposed on the city's property by fourteen inches. The city demanded he remove the shed. Instead he cut eighteen inches off the structure. The city sent him a final notice of removal. He had an attorney write a letter and included a property survey showing his shed was located on his property and never heard anything back.
One day a crew of city workers appeared taking photos and measurements. He again received a notice of removal from the city. He ignored the letter and is waiting for them to tresspass and remove the shed that is 100% on hus property.