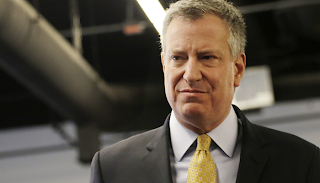 In his first year as mayor, Bill de Blasio has signed into law every bill passed by the Council. It's only the second time in more than two decades a mayor went through a calendar year without having vetoed a single piece of legislation.

Both sides of City Hall touted the close alliance.

"Whether it's extending paid-sick days to over a million more New Yorkers, successfully fighting to provide free lunch to hundreds of thousands of New York City middle-school students or being a national leader on immigration reform, the City Council is proud of its record of standing up for New Yorkers," said Robin Levine, a spokeswoman for Mark-Viverito.

"From municipal IDs to paid sick leave to the slew of Vision Zero initiatives, we're proud of our legislative accomplishments to date," Adams said. "Mayor de Blasio will continue to work with the City Council on legislative actions aimed at improving the lives of everyday New Yorkers and tackling the very issues that New Yorkers elected him to address."

The Council still has one more scheduled meeting this year, but neither side of City Hall was aware of any imminent legislation that might result in a veto.

And this is something to brag about?
Posted by Queens Crapper at 12:13 AM

The Real Tragedy here is this slug will most likely get re-elected...

why do some new Yorkers call him Bolshevik Bill ?

the body cameras should be for the local & state pols and their nys felons (repeat offenders).

Hand in hand? Waz that mean? One hand jerks off the other?