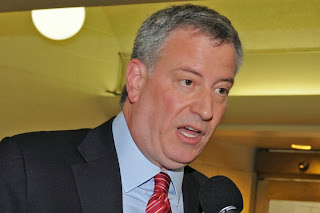 The number of New Yorkers struggling with homelessness has reached unprecedented levels under a leader that vowed to take on the growing crisis.

In Mayor Bill de Blasio's first year in office, the number of people living in homeless shelters rose to 58,913 -- an all-time high -- WNYC reported. Although de Blasio inherited a dire situation (homelessness jumped 71 percent on Mayor Michael Bloomberg's watch, according to the Coalition for the Homeless), about 3,000 more people are living without stable shelter now than in October, despite new programs designed to fight homelessness that went into effect this past fall.

The current mayor's administration says that although they cannot specify exactly when the city can expect homelessness to begin declining, the initiatives -- namely, programs targeting disproportionately affected groups -- should improve conditions down the road.

As long as NYC has a huge welcome mat on its doorstep for anyone from anywhere to come and squat in housing we pay for and collect our generous benefits, the problem is only going to get worse. Check this out:

A fiery debate erupted between one resident and Hevesi while discussing the proposed Glendale homeless shelter. The resident, who wished to remain anonymous, accused Hevesi and other elected officials of helping to create the crisis.

“You’re the cause of the problem,” the man argued. “This whole homeless thing is the fault of the judges, politicians and lawyers.”

Hevesi responded with shock and dismay to these accusations: “In the past year, has there been anyone who stood up more against this shelter than I have? Any elected official or anyone in this room? The very idea that when we are in a crisis, not only as a city but as a community, that your response is to point fingers is outrageous. The only way to get through this is to problem solve together."

Sounds like Mr. Anonymous touched a nerve. Perhaps because of this?
Posted by Queens Crapper at 12:30 AM

If only we started deporting more like we should be.

Hevesi? Didn't he go to jail? Do they mean DeBlasio? Is this just a retread?

Andrew Hevesi is an assembly member and has not gone to jail. His father, Alan, did.

this homeless crisis,or pandemic,could have been abated if the blaz focused on housing people and being more aggresive with corrupt landlords and greedy developers instead on getting pre-k passed.Is it wrong to assume that a lot of kids in pre-k are some of the homeless that are victimized here?

This homeless "crisis" will continue as long as there is big money to be made by the "not- for-profits" that run them. They all have an insestuous relationship with the City or State and combined with the "rite to shelter" laws make for an unending Cash Cow.

If you build the shelters, they will come!

Why pay rent? The shelters are great place to live. The low requirements of get into the shelters. I know people who have good jobs and yet living in the shelters. Just give away the city mayors!

Obviously more shelters have to be built, the demand for free housing is limitless, especially when its available to anyone now alive on planet earth to come to Queens and receive it as their right.

Maybe Bill and his reformed lesbian wife will take them in. Dante, give up your room please.